To paraphrase what the late Hunter S. Thompson used to write about Rolling Stone magazine deadlines and his portable telex machine: the CBLDF home office mojo wire is starting to hum. I’m late with my diary!

We’re rushing towards all sorts of deadlines.

Let me rephrase that.

The deadlines are hurtling towards us!

The one-of-a-kind artist sketch cards, autograph cards, and art for the regular are starting to flood into the offices at Cryptozoic Entertainment.

It’s becoming very clear to me that artists are donating their time and talent to give us amazing work.

Below are cards featuring the intellectual property of James Kolchalka, creator of American Elf, Johnny Boo, Robot vs Monkey, and so many more of my favorite comics. Two of the cards are by James himself! 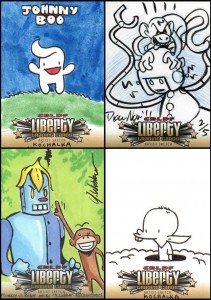 From the top left and clockwise:

I submitted a few Kolchalka character cards myself!

As promised, take a look at Dan “FragaBOOM” Fraga’s multicard masterpiece in progress. It’s always so interesting to me to observe how an artist thinks and makes choices as he’s working.

Someone asked me how long I’m going to be blogging about Liberty Cards.
Answer is simple: when I run out of exciting stuff to show off.
Which means: Never!

Between now and then, be here every Tuesday and Thursday for more behind the scenes peeks!

UPDATE: Yesterday I wasn’t able to identify the card by Diana Nock.

I’m the artist of the mystery sketch card.
The robot is my character Girlbot from my webcomic The Intrepid Girlbot, and I drew that at Stumptown this year.
Mystery solved!
–Diana

My thanks to Tiff Hudson for being the sleuth that made the proper connection.