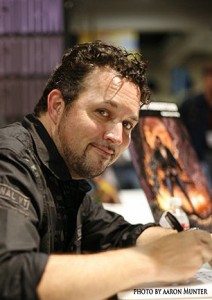 Darick Robertson is the kind of guy you’d like to share a beer with — he’s always ready for a laugh with friends and fans alike. He’s also the sort to foment revolution over that beer, with a wicked twinkle in his eye.

The co-creator of the critically acclaimed series Transmetropolitan with writer Warren Ellis and the artistic rogue behind the raucous series The Boys, Robertson has been drawing funny books for nearly 20 years. His work has been praised by Wired Magazine and Rolling Stone and he counts many of the Hollywood elite among his fans, but Robertson invariably remains a warm and humble presence at conventions, always willing to do a little bit extra for the fans who’ve supported him through the years.

With the pending release of Transmetropolitan: All Around the World — the sale of which benefits CBLDF — we checked in with Robertson for this edition of The Good Fighters.

CBLDF: First, let me say that we really appreciate all of the support you have given CBLDF over the years. How did you first find out about CBLDF?

Darick Robertson: I believe my first awareness came through being such a big fan of the great Frank Miller. His outspokenness on behalf of the CBLDF when I was just getting started in my mainstream career always kept me aware of how important it is for our industry to stand against censorship and ignorance.

Robertson: The entire Bill Of Rights is important to me, but the first Amendment keeps me from having to silence my unpopular ideas and explore thoughts and projects that might not fit within the mainstream of the times. I think of the struggles fought by the late great Lenny Bruce. What was outrageous then is commonplace today, but the suppression of his voice drove the artist to ruin. The First Amendment is there to protect those that want to be heard. If we don’t protect our rights, they slowly get eliminated.

CBLDF: You’ve worked on a couple of books — Transmetropolitan and The Boys come immediately to mind — that have pushed boundaries and really embraced the spirit of free speech. Was this a conscientious decision on your part?

Robertson: Only in that I enjoy that kind of challenging material and believe that there was more than shock value at the heart of both projects. I more than worked on them, I co-created them, in that the themes and direction of those titles is personally very important to me. When an artist and a writer work in unison to create something, then two voices are being heard by the audience. 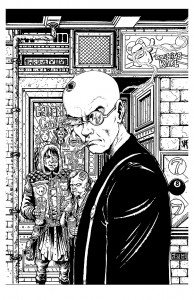 CBLDF: On May 3, the world celebrated World Press Freedom Day, a UN-proclaimed recognition for journalistic freedom around the world. What are your feelings regarding freedom of the press, and how has your work on Transmetropolitan influenced them?

Robertson: I’m always honored and flattered to be told, as Warren Ellis often is as well, that Spider Jerusalem inspired a reader to go into journalism. I think the fight now is not so much to be uncensored, but to be heard above the cacophony of bullshit that surrounds the information. Getting valid and true information from the wave of blatant spin and propaganda designed to sell us something or keep us afraid is harder and harder in our brave, new world. What intrigues me the most is what I’m not supposed to know, what I’m not supposed to see. I respect guys like Matt Taibbi and Jeremy Scahill, who report on dangerous topics and unflinchingly tell the truth, not only about what they know but how they feel. They don’t sanitize their anger for the masses. It’s what I loved about Spider Jerusalem.

CBLDF: Transmetropolitan is about to celebrate its 15th anniversary. That has to be a great feeling, right?! How is the work still relevant today?

Robertson: It remains relevant in that unlike Orwell, we didn’t put a year on it, so we didn’t give ourselves a deadline for whatever prophetic ideas got in there. I remember laughing when we introduced the ‘Sex Puppets.’ I’d drawn it onto a calendar in the toll booth in issue one, and Warren and I would collaborate in this way, wherein I’d impulsively fill up the backgrounds with notions and funny ideas, and he pick up the ball and run with it. I told Warren what I imagined that show would be and we laughed and kept it going. Then in 2002, Crank Yankers appeared on Comedy Central, and I’m watching a segment with the puppets doing it, and a strip club sequence and there are nipples on the puppets, lo and behold, I was essentially seeing “Sex Puppets” in real life.

A lot of what we did was observational and things have only gotten weirder since we stopped doing that series.

CBLDF: Transmetropolitan: All Around the World is about to hit shelves and coffee tables everywhere. Project Manager Susan Augér was key to making the book happen, but how involved were you in the project?

Robertson: All the credit goes to Susan. She approached me about the project, and I thought it was a fun idea, and a good cause. She worked relentlessly into raising funding and organizing and gathering the artwork and writing, and I contributed moral support and some cover art and aesthetic opinions. Not much more. The work I’ve seen for it has been so gratifying and impressive. I can’t wait to see the final product.

CBLDF: Why did you decide that CBLDF should be the beneficiary of the proceeds from the sale of the Transmetropolitan art book?

Robertson: Without the CBLDF, books like Transmetropolitan would never have had a place in the industry to find its audience.