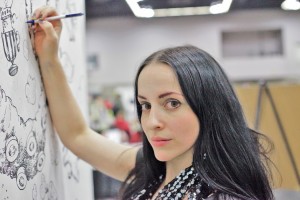 A fine artist and the founder of Dr. Sketchy’s Anti-Art School, Molly Crabapple creates work that provokes desire in some and the urge to silence in others. Her work also openly embraces sexuality, influenced by her experience as a model and burlesque dancer, which often brings her into opposition with censorship. Thus, she’s become an eloquent and devout supporter of free expression.

With Crabapple’s recent donation to CBLDF of an intricately-detailed 8′ by 7′ art monster — you can bid on it here — we took a moment to chat with her for this edition of The Good Fighters.

CBLDF: Your work frequently deals with glamour, performance and sexuality. Do you ever feel a concern for the content of that work will make trouble for you or others?

Molly Crabapple: I’ve been lucky in that any “censorship” I had to deal with has been of the weaselly corporate self-censorship variety (hell, at one point my own agent was blocked from looking at my site at work because of filters). While I’ve been lucky enough to never have to deal with official suppression of my work (thanks in part to organizations like the CBLDF), producing work that deals with sexuality is something that limits and stigmatizes one — especially if you’re a woman or a queer person producing this sort of work.

CBLDF: Have you ever experienced challenge, outrage, or censorship towards the work that you make?

Crabapple: I’ve definitely had my site blocked by filters (including Amtrak, Bob’s Big Boy, and the wifi for NYC juries), and had my work inappropriately rated by companies who couldn’t conceive that, while there were boobs in one story of mine, there might be nothing but monks’ robes and robot suits in another.

CBLDF: What are your feelings on the ebb and flow of tolerance and repression towards work that addresses sexuality?

Crabapple: I think that in the US, the trend is less towards federal government suppression of work (the Obama administration seems admirably unconcerned with obscenity prosecutions) and more towards a corporate and community effort to restrict access and money to anything that’s viewed as, or stamped as, controversial. There’s a widely believed myth that sex sells, but in reality it’s sexiness that sells. Or maybe giggling mainstream Talking-Vapid-Head discussions about sex. Sex itself is something that’s blocked, viewed as advertising poison and gets people who create work around it run out of other genres of work.

CBLDF: As an art entrepreneur, you founded the Dr. Sketchy’s Anti-Art School. Have you had to manage outrage or protest towards the nature of that institution?

Crabapple: We did get raided by the vice police in Kansas City for running an unlicensed strip club. And we were shut down in Taiwan for a few months. But we’ve also produced events at the Museum of Modern Art and the Brooklyn Museum, so I’d say the response was pretty positive

CBLDF: Could you tell me about how you became aware of the CBLDF, and why you choose to support the organization?

Crabapple: Everyone in comics knows the CBLDF. In part because comics are often unfairly painted as being “just for kids”, our industry is usually a battleground for free speech challenges. When some small-town Comstock wants to make a point about decency, they often choose comics as the place to do it in. Having you guys around to protect people not only from imprisonment, but from being financially ruined with legal costs, is so crucial.

CBLDF: What are your feelings about the current state of free expression for artists, and your concerns for the future?

Crabapple: I think the real battleground in the US is going to be net neutrality. An internet where AT&T controls the speeds things are loaded at is an internet reduced to safe corporate pap, where anything controversial (be that Wikileaks or tits) is turned off. A net that’s not neutral is the easiest way to hide government and corporate censorship behind the veil of the “free market.”

Learn more about Molly Crabapple by visiting her website. You can view a video of Crabapple discussing her support of CBLDF and the creation of her original piece for the Fund here. The CBLDF auction for her gorgeous art monster is going on until May 27, 2011. Bids can be placed online here.