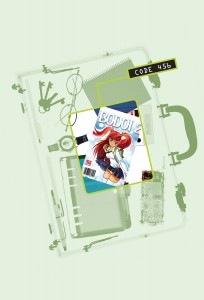 Since the announcement, more information about the case emerged in the ensuing media coverage. Brigid Alverson delved into the details for Comic Book Resources:

Charles Brownstein, executive director of the CBLDF, said that the materials that led to the arrest of the man, whose identity is being withheld both as a matter of legal strategy and to protect his privacy, were comics, not photographs. “My understanding with regard to the material at issue is that it includes fantasy comics drawn in a variety of manga styles,” he said in an e-mail to Comic Book Resources. “One of the items is believed to be a doujinshi, or fan-made comic, of the mainstream manga series Magical Girl Lyrical Nanoha. Another is believed to be a comic in the original Japanese, depicting stick figure-like figures in various sexual positions. In all cases, the authorities are targeting expressive art and not any photographic evidence of a crime.”

Some may ask why the defendant doesn’t simply disregard the charges, since they’re being prosecuted in Canada. Brownstein explains to CBR:

“The defendant was permitted to return to the United States, and is observing court imposed restrictions, such as not using the Internet outside of work,” said Brownstein. However, he cannot simply walk away from the charges. “Not appearing for trial would not stop his case from being prosecuted or going to trial,” Brownstein explained. “The charges he faces are sufficiently serious that if found guilty, the offense could come with risk of extradition. Likewise, the sex offender registration could be reciprocal in the United States. And, furthermore, he shouldn’t need to live like a fugitive because the comics he had on his computer led an authority to wrongly accuse him of a horrible crime.”

The defendant’s name has been withheld for reasons of legal strategy, but there’s also a very human reason for withholding it, one that most people can relate to. From the CBR article:

In this case, however, Canadian customs determined that the manga they found on the man’s laptop was child pornography, and the defendant faces a minimum of one year in prison if convicted. Brownstein said that the decision not to reveal the man’s name is based mainly on legal strategy, but he added, “It’s also because it’s important to be sensitive to the fact that we’re talking about a young man trying to maintain gainful employment who’s being wrongly accused of trafficking in child pornography. That’s a guilty until proven innocent kind of accusation that follows you around for the rest of your natural life on Google. That’s one of the really scary elements of this case — a customs agent can look at your comics and make an accusation that, no matter what happens in the courts, can turn your entire life upside down.”

Brownstein closes his interview with CBR with the following:

“More of these cases are occurring,” Brownstein told CBR. “I certainly expect, as word of this gets out, to hear even more stories of customs searches and seizures for comics content from people who thought they were alone. They’re not. We hope they contact us and tell us their story so we can achieve a fuller understanding of the problem’s scope and respond with even better tools to help people in similar situations.”

io9’s Jason Thompson goes into greater depth on the recent attacks against manga, both in the US and abroad:

These charges come at a time when sexual material in manga is being challenged both in Japan and abroad. In 2007, Christopher Handley, a manga collector in Iowa, was charged under the PROTECT Act for possession of child pornography when custom officials intercepted and opened a package for Handley from Japan. Police later came to his house with a search warrant and charged him based on several “obscene” manga found in his collection. Despite a vigorous defense by the CBLDF and comic luminaries such as Neil Gaiman and manga expert Matt Thorn, Handley finally pled guilty in 2009 and was sentenced to six months of prison time.

In 2010, the Tokyo Metropolitan Government passed Bill 156,an expansion of a dusty 1964 law titled the Tokyo Metropolitan Ordinance Regarding the Healthy Development of Youths, giving the Tokyo government far-reaching powers over minors’ access to the Internet and mobile devices, and criminalizing the sale to minors of “any manga, animation, or pictures (but not including real life pictures or footage) that features either sexual or pseudo sexual acts that would be illegal in real life, or sexual or pseudo sexual acts between close relatives whose marriage would be illegal, where such depictions and / or presentations unjustifiably glorify or exaggerate the activity.”

Promoted by its sponsors with “protect the children” style rhetoric, the bill passed despite a petition against it signed by numerous manga artists and a threat by major manga publishers, including Shonen Jump publisher Shueisha, to boycott the 2011 Tokyo International Anime Fair (the boycott threat never materialized, as the fair was canceled due to the earthquake). The bill goes into full effect on July 1st, but already the Tokyo government has released the names of the first six manga targeted under the bill.

io9 further points out the chilling impact that censorship in the West has on Japanese censorship:

Efforts at manga regulation in the Japan and the US aren’t unrelated; as Japanese pop culture writers including Frederik Schodt and Roland Kelts have pointed out, censors in Japan are invigorated by the efforts of their counterparts in America and Canada. Many of the sponsors of Bill 156 used arguments like “shame on us for permitting stuff that isn’t permitted in the West.”

As Tokyo governor Shintaro Ishihara, a major sponsor of Bill 156 recently elected to a fourth term after the passage of the bill, said in a press conference in December 2010 (from the blog of manga translator and anti-Bill-156 advocate Dan Kanemitsu): “It’s clear there are perverts in this world. Sad people with warped DNA… I don’t think Western societies would tolerate such things very much. Japan has become too uninhibited.”

Writing for The Beat, Heidi MacDonald speaks from her personal experience as a journalist how this case cuts close to home:

In my years as a journalist. I’ve been emailed tons of stuff, found a ton of images on the web and downloaded them. The lines between pornography and a fun story for kids in Japan are poorly drawn, admittedly, and one man’s moë is another man’s filth. These images could be sitting there in some forgotten image folder, waiting to be found. They could be on your cell phone or your iPad, or your laptop, all of which can be searched at a border crossing. While child pornography is to be decried in all its forms, drawings, as repugnant as they may be, do not constitute an actual crime, any more than drawings of a murder constitute a killing.

Comics212, a blog from Christopher Butcher, the manager of The Beguiling comic book store in Toronto and co-founder of the Toronto Comic Arts Festival, offered a Canadian’s perspective on the case:

I’ve been aware of this case since just before I gave my talk on comics and censorship this past February, and every aspect of it makes my blood boil. That ‘manga’ is targeted as a buzzword that encourages Customs agents to do more thorough searches, that an illustration of a person or act is the same thing as the person or act under Canadian law, that Art has no legal defense in Canada anymore. It’s all awful, and I am very, very glad that the CBLDF has stepped in to provide funding and support for this case, to ensure that at the very least this man is rigourously defended, and with any luck a precedent can be set under Canadian law.

Creators, publishers, retailers, and readers are all at risk when crossing borders — just ask Tom Neely and Dylan Williams, who both had books seized when they traveled to TCAF earlier this year. This case has far-reaching implications, not least of which is a right to travel with comics without being subject to extra scrutiny for doing so. This fight is worth the effort, not only to protect an American citizen who is unjustly accused, but also to ensure that comics fans have some protection when they travel abroad with comic books.