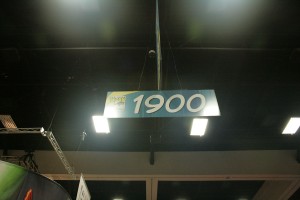 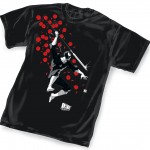 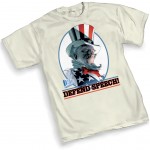 CBLDF staffers hit the ground running on Tuesday to set up Booth 1920. We were delighted to open the boxes containing our new shirts from John Cassaday and Matt Wagner! Exclusively designed by Graphitti Designs to benefit CBLDF, the shirts proved to be a hit with attendees as well! We also had new color variants of the “I Read Banned Comics” T-shirt on hand. (Look for the new shirts in our online store next week!) 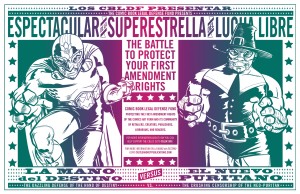 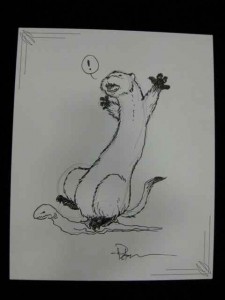 Thursday got rolling with two amazing Master Sessions! During the first, Mouse Guard creator David Peterson discussed his process in depth before plunging into drawing a series of suggestions from the audience. Fans asked him to draw series favorite Saxon before dropping Peterson into foreign territory: a weasel riding an eel! Peterson handled the suggestion with aplomb and humor, producing an adorable piece for CBLDF’s Saturday auction!

Right after David Peterson, Shannon Wheeler took the stage, providing an amusing hour of instruction. Wheeler kept the jokes coming as he talked about his process and making some of the funniest cartoons found in The New Yorker.

Threadless debuted their new T-shirt series Noir, and even donated sets of the shirts to be raffled during the party — several lucky fans got a set of all four shirts in the series!

Friday saw two spectacular Master Sessions panels, the first with Jaime Hernandez, and the second with Matthew Holm. Hernandez demonstrated his inimitable skill, taking fans through his singular story-telling approach. Holm, the artist behind the hit children’s graphic novel series Babymouse, followed up his charming Master Session with an extended visit to the CBLDF booth to sign and sketch for fans of all ages!

CBLDF Executive Director Charles Brownstein moderated an insightful panel about how comics collectors have been targeted by authorities when crossing international borders during CBLDF: Can Comics Send You to Jail? In light of CBLDF’s current case, the panel was a poignant discussion of the challenges people face when crossing borders, how they can protect themselves, and how censorship is no longer limited only to creators and retailers. 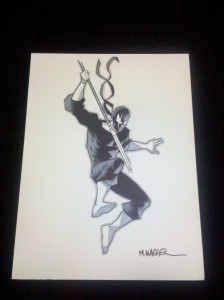 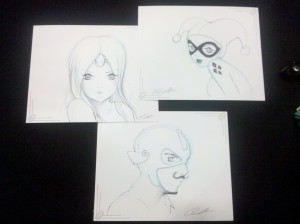 Camilla d’Errico followed, creating delightful drawings of classic Harley Quinn, Captain America (with a mustache!), and Mystique. d’Errico wowed the crowd with a witty account of her process and her devotion to her tool of choice: the humble Bic pen!

Saturday also saw an accounting of CBLDF’s work defending the First Amendment rights of the comics community in the panel CBLDF: 25 Years of Protecting Creativity. Supporters were treated to a visual presentation relating the numerous victories and unfortunate defeats that CBLDF has faced over the years, as well as an in-depth discussion of the current case and CBLDF’s future goals. 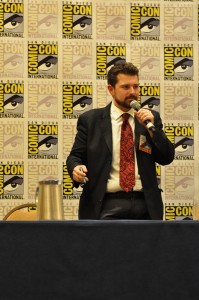 For the first time, the auction was held offsite, at the Hilton Bayfront. That meant fans of comics who didn’t have convention badges could attend. It also meant supporters could enjoy a cold beverage of their choice during the auction!

The auction raised thousands of dollars to support CBLDF’s work for free speech! A big thank you goes to all of the artists who donated to the auction, as well as thanks to Elisabeth Forsythe and Andrew McIntire of TFAW for gathering pieces.

As the day drew to a close, CBLDF packed up — many books and shirts lighter — to head home to New York. CBLDF would like to thank all of the fans who came out to show their support by becoming members, buying premiums, and bidding on art in our annual auction! A big thanks also to all of our wonderful volunteers: Angela, Betsy R., Jessica, Kelly, Sarah, and Will!

Finally, CBLDF would like to thank Threadless, TFAW, Image Comics, and Bonfire Agency for their support of this year’s events!

To see more of the CBLDF in action at Comic-Con, check out the following gallery!