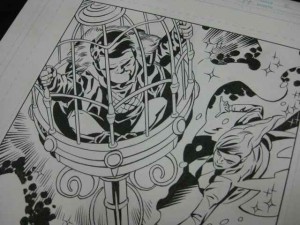 Support CBLDF’s important First Amendment work at the CBLDF 25th Anniversary Benefit Auction! Now held at the Hilton Bayfront hotel, the auction is open to the general public and free! Sponsored by TFAW.Com and Comic-Con International, the CBLDF Benefit Auction is the Fund’s biggest auction of the year. Come support the Fund at this terrific event!

Some items may be added to those listed below. For a full photo gallery, visit www.cbldf.org, or check out our Facebook and Twitter feeds!

All bidders will need to have a bidder number, which can be picked up at Booth 1920 at any time during the convention, or at the auction.

If you are unable to be at the convention, or unable to attend the auction, bids will be accepted online bids starting Monday, July 19 until Saturday, July 24, 1:00 p.m. Pacific Time. All bids must be emailed to charles.brownstein@cbldf.org with “SDCC AUCTION BID” in the subject line. Be sure when bidding to use the item name as it appears on the website.

This is not a silent auction bidding system. All bids placed online will be used as opening bids during the live auction on Saturday, July 23. In the event there are multiple bids on the same item, the highest bid will be the one accepted.

Bid amounts placed online will not be disclosed before the item is auctioned. Winning bidders will be notified by email the week following the convention. Payment is expected within 7 days from said email