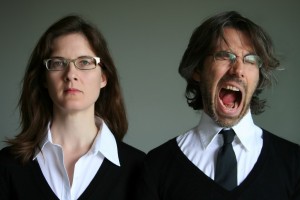 To meet Kathryn and Stuart Immonen is a bit like meeting a modern-day Nick and Nora Charles. Sure, they’re a bit more profane, but they have all the sharp and witty repartee of the bantering married duo that defined the Thin Man movies. (You can enjoy some of this banter on their blog.)

The Immonens have been in the comic biz for several years, working individually and together. Their work is irreverent, entertaining, and classic. Stuart is known for his distinctive art style and storytelling ability, on display in the cult hit Nextwave and most recently in the hit series Fear Itself from Marvel Comics. Kathryn is known for her fearless, honest writing, with several Marvel titles under her belt, including the beloved Patsy Walker: Hellcat, Wolverine and Jubilee, and Heralds. Together, they created Moving Pictures, a critically acclaimed web comic and graphic novel set during the Nazi occupation of Paris.

The Immonens recently donated several pieces from their personal art collection to the CBLDF as part of our Artists to the Rescue campaign. They also took a moment to answer a few questions for The Good Fighters.

CBLDF: How were you introduced to CBLDF?

Kathryn: I couldn’t say, exactly. For us, the CBLDF just seems like one of those ubiquitous and indispensable institutions. I’m not sure you could be involved in comics in any way and not be aware of its existence and the work it does.

CBLDF: You recently donated several pieces of original artwork to CBLDF’s Artists to the Rescue campaign, which has already raised thousands of dollars and looks to raise even more with your contribution. What motivated you to donate?

Kathryn: It seemed like the least we could do… or maybe the best we could do. Like the unpublished Kirby romance story we donated to the San Diego auction a couple of years ago, we just felt that this material could be working harder than just sitting in a drawer. 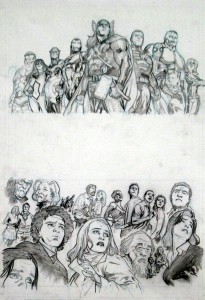 Stuart: We’re not huge collectors… of anything, really… and only own a select few originals, and of those, an even smaller number actually hang on a wall. We know there are people with more discretionary dollars and more display space who we thought would appreciate these pieces and be able to give them good homes.

CBLDF: Tell us a bit more about the pieces you donated for our Artists to the Rescue campaign and how they became part of your personal collection.

Kathryn: It’s just what happens when you work in comics long enough, I think. The Jill Thompson page was a trade between her and Stuart when they met at a signing years and years ago in Toronto, at a now-long-closed comic shop. And it’s not that we don’t love the piece and are completely honoured by the gift, it’s just that we feel the CBLDF could benefit financially from her extraordinary generosity as we did emotionally.

Stuart: Sure, cartoonists trade stuff all the time; it comes right after shaking hands. I’m sure she’d support the idea of her work not only surfacing after so long for new collectors to enjoy, but also that it could serve double duty supporting a worthy cause. 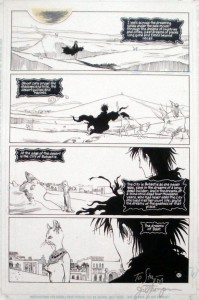 In addition to trading pages, I very infrequently have the chance to hang on to my own work for a while. I’m not too attached to it, but recognize that others like to see it. The Avengers drawing saw publication on the cover of one of the variant editions of the first issue of Fear Itself.

CBLDF: The two of you have been working in comics, both separately and together, for several years. Have you ever been censored? If so, tell us about it.

Kathryn: For more than twenty years! And no, we never have and I think folks need to be careful about crying ‘censorship’ when what they really mean is ‘editing’. But certainly, I think ever since the insanity with Omaha Cat Dancer in Toronto in 1990 or even the Eli Langer arrest in 1993 you can hardly be insensible to the issues.

CBLDF: Border officials on both sides of the border are searching and seizing more and more electronic devices and comic books, and as you know, an American was arrested by Canadian officials for the comic books he had on his electronic devices. You live in Canada, so have you ever experienced these searches when you travel?

Kathryn: I think everybody knows by now that your computer etc. can be searched and although we’ve never had it happen, I’m sure we’ll win that particular lottery at some point and I think most people are prepared for it. Having said that, though, I don’t think anybody thinks that poor judgement should be illegal.

CBLDF: Why do you think people should support CBLDF?

Kathryn: There are many people who can write and have written more eloquently on the subject. I think you can’t do much better than point to Neil Gaiman’s “Why defend freedom of icky speech“.

Stuart: It’s a small industry; readers and creators both need to nurture it and cultivate it if we want it to survive, evolve and grow. Sometimes that means making some challenging decisions, or at least supporting those willing to do so on our behalf.

CBLDF thanks the Immonens for their generous donation and support. Please help support CBLDF’s First Amendment legal work by bidding on the pieces, making a donation, or becoming a member of the CBLDF!