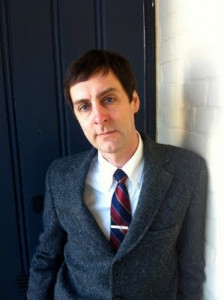 In many ways, Eric Stephenson has changed the face of comics publishing. Under his guidance as Publisher, Image Comics has become a juggernaut of innovative and creative comics projects, many of them critically acclaimed and instant sell-outs. Under Stephenson’s guidance, Image has become the go-to place for new ideas and new creators.

In addition to being an advocate for new creative work, Stephenson is also an advocate for free speech. His support for CBLDF is as fierce as his support of creators. Under Stephenson’s watch, Image Comics has become a corporate member, sponsored numerous parties, and published the CBLDF Liberty Annual, raising nearly $100,000 for CBLDF’s important First Amendment work.

For this edition of The Good Fighters, we took a moment to talk to Stephenson the eve of the first ever Image Expo, which takes place this weekend in Oakland, California.

CBLDF: As the current Publisher of Image Comics, you’ve done more to support CBLDF than many of your predecessors. Why is CBLDF so important to you?

Eric Stephenson: Well, I think what the Fund does is more important than many people realize. People take freedom of speech for granted, I think, and even though it’s one of our most basic rights in this country, it’s under pretty much constant attack. Freedom of speech is challenged on a daily basis in this country and it’s only through the vigilance of organizations like the Fund that our rights remain intact. It’s a constant battle, and it’s important for all of us that that Fund is on our side.

CBLDF: You’ve been a fan of comic books since childhood, and you have expressed nostalgia for the artistry of Jack Kirby, the recently passed John Severin, and many other golden and silver age creators. Many of these creators had to work under the now defunct Comics Code Authority seal. How do you think these creators might have worked differently if they hadn’t had to deal with the comics industry’s self-censorship?

ES: That’s a funny thing, really, because I think those comics were good in spite of the restrictions. I actually think that self-censorship kind of made the writers and artists solve various problems in more creative ways. It was a different time, too, and I don’t think Jack Kirby was chomping at the bit to have, I don’t know, rampant profanity and hardcore sex in his comics, you know? I can’t speak for Kirby or John Severin or Will Eisner or John Buscema, but I somehow doubt that they would have felt more sex and violence would have improved the overall quality of their work. Would their work have been worse without the code? Well, probably not, but I don’t think it would necessarily have been better, either.

CBLDF: You’ve been a comic book creator yourself. How does the perspective of a creator compare to that of a comics publisher when it comes to free speech?

ES: For me, it’s pretty much the same. Not long ago, I wrote on my blog about my frustration that Diamond censored a Previews ad for our PIGS title, because it had swastikas in the artwork. The creators of PIGS aren’t endorsing Nazis or racism – they’re doing a story about the evils of those thing and their resurgence in our world. But apparently, Germany has a law that those things can’t be depicted, so Diamond made us change the image. It will be published as it was originally intended to be seen, but it won’t be available in Germany.

ES: Creative ownership allows writers and artists to do actually create. The corporatization of comics just leads to more spin-offs and retreads, and honestly, those things hold us back as an industry. If we’re just going to tell the same four stories over and over again, and keep shoving the same characters and concepts down people’s throats over and over again, we will die by attrition.

When I spoke at ComicsPRO, I noted that familiarity breeds contempt, and if not outright contempt, then apathy and disinterest. You run through the same routine enough times and people figure they’ve got your number – no matter how many times you care to change it.

New creativity is what is driving our growth at Image, and it’s what will drive growth for this industry. Creativity in sustainability go hand-in-hand, and you can’t have either of those things without the freedom to create new work.

CBLDF: As a publisher, you’ve broadened the scope of books that Image publishes, releasing some of the most original and acclaimed titles on the market. Have you ever had concerns about the content of a book Image publishes? How did you handle those concerns?

ES: There are sometimes things that aren’t to my personal taste. Like I was saying earlier, I don’t necessarily think that more sex and violence and profanity makes a story better. If it’s honest, if it’s real, then okay, but I’m not a big fan of that sort of material just for shock value.

CBLDF: Why should people support CBLDF?

ES: All of the above. If you’re a creator, a fan or a retailer, you could well wind up in a position where you’re on the wrong side of the law, and if that happens, as it did recently in Canada — you want the Fund on your side.

Join CBLDF, Image Comics, and iFanboy this Friday, February 24,  for the Image Expo Welcome Party (details here). CBLDF will be exhibiting all weekend, February 24-26, at the Expo. If you can’t make it to the Expo, please help support CBLDF’s important First Amendment work by making a donation or becoming a member of the CBLDF!