The 2012 Membership Program has a number of great premiums, including t-shirts, exclusive buttons, and the Fund’s first round of items featuring the now defunct Comics Code Authority Stamp. But one of the items we are most excited about is an awesome, high-quality print based on the current membership card art, designed and illustrated by Artist Supporter Cliff Chiang. This last piece just came in, and it is a special incentive for members joining at the Protector and Champion levels.

This week, I went to visit Cliff Chiang’s studio so he could sign the prints, and it was the first time he saw the final printed artwork. Cliff shares his studio with Jared Fletcher, a designer, letterer, and cartoonist (who created our popular I READ BANNED COMICS t-shirt), and cartoonist Andy MacDonald (also a hearty CBLDF supporter). Here are a few pictures I took when I was there.

First Cliff signs the prints, which are extremely limited and only numbered to 50 (As a fan of classic anime, Cliff likes to get into his “Speed Racer” head-space for a marathon signing.): 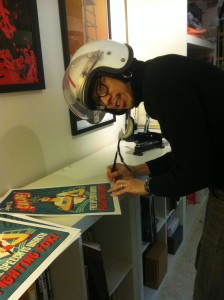 Here’s Cliff using his personal embossing seal on the prints: 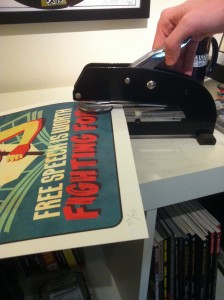 And the final look — accept no imitations! 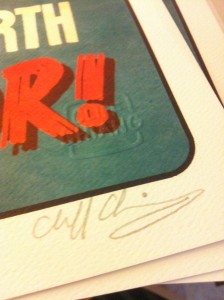 These prints are full-color screened onto heavy bond watercolor stock. The colors, in person, are very deep and rich, and it’s one of the more striking pieces done specifically for the CBLDF in a while. As mentioned before, they are numbered and embossed with Cliff’s “official” signature, as well as actually signed by the man himself. The 2012 Membership drive is the only opportunity to own one of these prints. Of course, if you have already joined at the Champion or Protector levels, we’re sending yours out to you this week!

In case you missed it, Comics Alliance talked to Cliff about his inspiration for the new membership card here. Even if you can’t afford to join the CBLDF at these high levels, you should still join at any level you can afford, because it’s important to fight back against attacks on comics. Here’s a piece I wrote for Comics Should Be Good about why I think joining the Fund is important.

If you joined, thank you! Please take a snapshot of yourself when you get your items and twitpic to @CBLDF with #proudmember to let us know that everything got there safe. We’ll be sure to retweet you to let you know we got it!