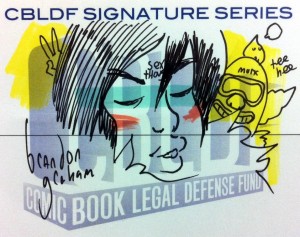 Brandon Graham is no stranger to boundary pushing comics. He cut his artistic teeth making experimental sex comics before going on to create his idea heavy works Prophet and King City. His groundbreaking collection King City just came out from Image, and he’s supporting the Fund by providing signed & sketched bookplates to raise money for our work. Brandon spoke out on why the Fund matters to him on his blog last summer. He wrote:

The idea of just getting in trouble for having a comic book on you is nuts, with no victim and the crime being an offensive combination of words and lines. It’s like trying to prosecute thoughts you don’t like.

I have a hard time wrapping my brain around the idea that something you could draw could lead someone else to be locked up just by having it on their person. And just looking at the list of books CBLDF has on their site that have had problems at the border (how awkward would it be to have to explain why you are carrying a copy of The bone ranger)
–I’ve read a lot of these, I have friends and have myself probably drawn worse things than what’s in most of these books.

You can get your copy of King City with a signed & sketched Brandon Graham bookplate now for a $60 donation to CBLDF.