As long as I’ve been aware of Seattle in any meaningful way, it’s a city I’ve associated with comic books. It’s a place that in my mind’s eye has always been painted in the scratchy cross-hatching of Peter Bagge’s early Hate comics. Knowing that Fantagraphics Books is headquartered there has only exaggerated my concept that Seattle is a city made of awesome comic book panels. My first trip there this past weekend made me realize that the city was not, in fact, created out of whole cloth by the pen of Peter Bagge, but it certainly confirmed that Seattle is absolutely a Comic Book Town.

Emerald City Comic Con was three days of infectious enthusiasm, excited mobs, and great comics of all varieties. The CBLDF exhibited there all weekend, and it was incredible to talk to all the fans and creators that populate the Pacific Northwest. ECCC was a terrific show: well-organized, well-attended, and well-programmed. The show organizers (particularly Jim Demonakos and Kristina Rogers) made it easy to get situated and set up, and everything ran as smooth as any show I’ve participated in. Kudos all around!

In the end, with the help of great volunteers, artists who made booth appearances, a record number of attendees, and convention organizers who were on top of the game, we came home with $6,536! This is money that will help us continue our vital education work and assist us in paying back the legal fees accrued by Ryan Matheson — he was unjustly accused him of something and left in substantial debt by his defense. The donors at ECCC were happy to help, supporting the Fund’s refrain that no one should go to to jail — or go under the yoke of debt — for owning comics. 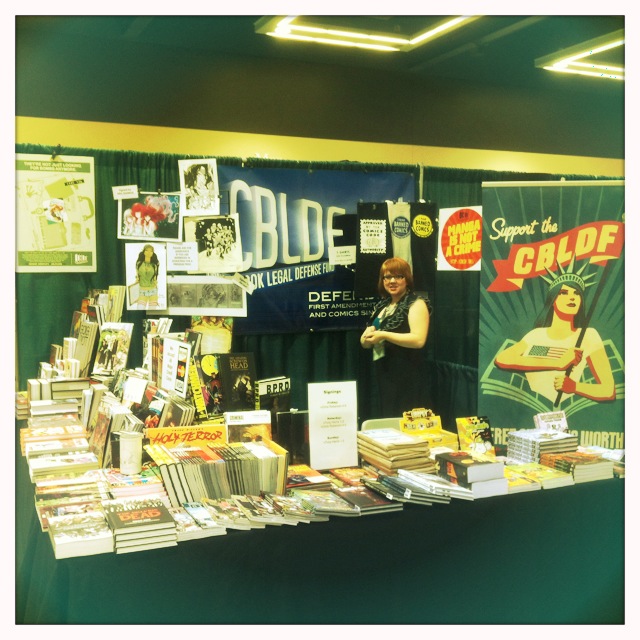 Over the course of the weekend, we hosted several immense talents who donated their time to sign at our booth: Chris Roberson, Tony Harris, and Matthew Dow Smith. Between hearing Chris reminisce about his early days of Legio of Super-Heroes fandom with a young fan and listening to Tony and Matt banter over their days working on the classic series Starman, it’s hard to think of a more entertaining way to pass the time. Their enthusiasm for free speech was particularly awesome to watch, as they encouraged fans to donate to the Fund and to get involved in the Good Fight.

The immensely talented Brandon Graham, Mike Allred, and Laura Allred also all made time to sign books for us. Books signed by all of these supporter artists will be available in the coming days in our Donation Zone.

I didn’t get to spend as much time in Seattle proper as I would have liked, but around the con, I did get to see many friends of CBLDF and folks I’m always happy to chat with. I loved talking to Tom “The Comics Reporter” Spurgeon, while around he ruminated on the ways Seattle has changed since his time there, and our shared love of silver age comics led to a brief pep rally over a handful of vintage Jack Kirby issues. Jacq Cohen from Fantagraphics recommended an astonishing number of places to visit for food and drink, and I had a few great meals with the convention road warriors from IDW and Dark Horse. The crews at DC and Top Cow took some valuable time to help us round up fundraising materials — all of these folks not only work like crazy publishing amazing comics, they always take time to help out the CBLDF while we are in the trenches at conventions, and it is always appreciated.

The show floor itself was packed with people. There were lots of kids everywhere and many families enjoying comics together. Artist’s Alley was backed up with lines of excited fans, and several of our artist supporters stayed so busy that they were barely visible from the other side of the crowds that surrounded them. This is a good problem to have!

I want to thank some very important people who spent the weekend in the booth. Sarah Park and Angela Moeny are two recurring volunteers who are always a blast when they help out behind the booth, and Fantagraphics’ own Ian Burns, who made it a mission to spread the word about our casework and handed out an improbable amount of literature. Thanks, guys!

All in all, my notion of Seattle is still not only formed by those classic issues of Hate and the other great comics of the Pacific Northwest, but it is now filled in with awesome memories of mobs of happy and friendly fans. Seattle is a great comics town, and it has a great comics convention!