This Friday, April 13th, CBLDF Corporate Member THREADLESS is hosting a Fashion Show Welcome Party to ring in C2E2 and benefit the Comic Book Legal Defense Fund!  Free to CBLDF members, with a suggested $20 donation for non-members at the door, this open bar event will boast a first look at several exciting new THREADLESS items, a raffle, comics stars, and much more!  Don’t miss out on this must attend event! 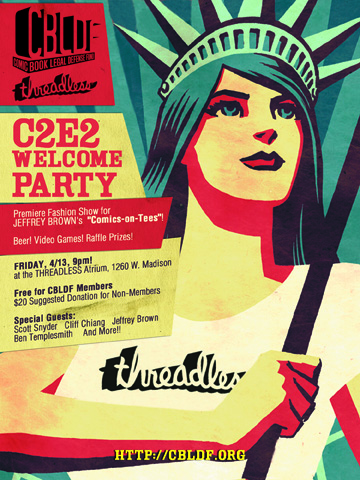 Entertainment for the evening will include the Premiere Fashion Show for the new COMICS-ON-TEES line of shirts by CBLDF Supporter JEFFREY BROWN! Featuring art by Jeffrey Brown, Anders Nilsen, Paul Hornschemeier, and Jeff Lemire, based on a story by Brown, these shirts show off some of the greatest talents in the alternative comics community and celebrate Chicago’s vibrant comics culture! This is the first look at this new series form the ultra-cool Comics-On-Tees line!

Raffle prizes will include a plethora of awesome Threadless swag, including original retail art, and great CBLDF items, including classic signed comics, exclusive prints, and more! Giant games of Mario Kart will be projected for attendees to play, with a guest DJ providing non-stop music, getting you in the mood for a weekend of comic con revelry. There will also be a “drawing wall” for ongoing Live Art throughout the night and plenty of beer, wine, and popcorn from the famous Threadless popper.  Celebrity guests from the world of comics will include Scott Snyder, Jeffrey Brown, Cliff Chiang, Sam Humphries, Ben Templesmith, and more!

To top it all off, THREADLESS and CBLDF will announce a major project for 2012, expanding their fundraising partnership and creating something awesome for comic fans of every stripe.  Don’t miss out on the first great comics party of 2012!

What: CBLDF/THREADLESS C2E2 Fashion Show Welcome Party
Where: The Threadless Atrium, 1260 West Madison
When: 9 PM
Why: To benefit CBLDF!
How much: Free for card carrying CBLDF members! $20 suggested door donation for non-members! 21 and up only!
How to get there: From McCormick Place, take US-41 N/S Lake Shore Dr north, and take a left on East Jackson Drive. Then take a right on S Michigan Ave. Take the first left on E Adams St, and the right on S Racine Ave. Then take a left on West Madion street — the Atrium will be on the right! (Approximately 15 minutes.)