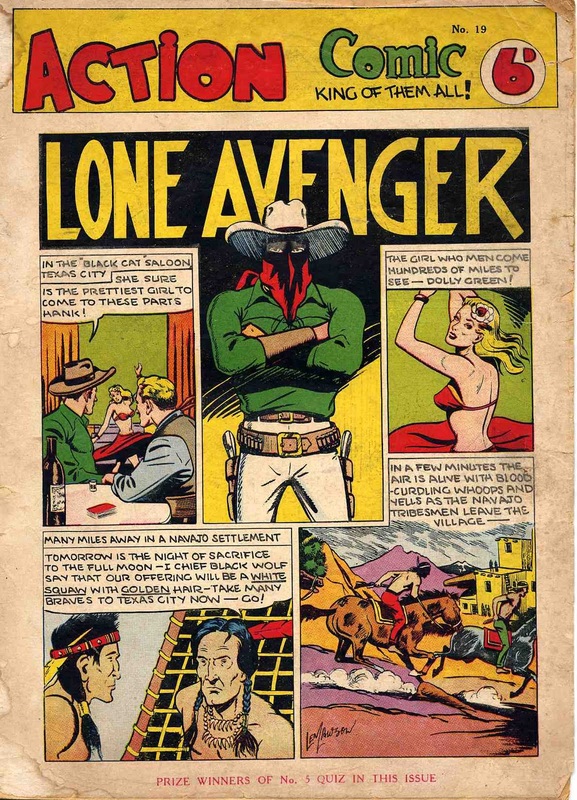 In examining the history of comic book censorship, sometimes it is difficult for people to separate the creator from the creation. A clear example of this is the sad tale of Australian comic creator Len Lawson and his creation, The Lone Avenger. Some commentators speculate that Lawson’s The Lone Avenger was probably as popular as Superman back in the 1940s and 1950s. However, today most people are unaware of the activities of the character or crimes of his creator. Still more are ignorant of the effect these actions had in causing the demise of the Australian comics market.

In 1946, one of these publishers, the Sydney-based H.J. Edwards Pty. Ltd. released The Lone Avenger. The Lone Avenger was created by a teenager named Leonard Keith Lawson. An obvious rip-off of Fran Striker’s Lone Ranger, The Lone Avenger told the story of a masked cowboy named Paul Nicholls, who dressed in a white hat, red mask, green shirt, leather gauntlets, belt, and boots. The Lone Avenger fought crime: first on the range as a wandering hero and then in the town of Redrock, where he eventually would settle down and become Marshal of Redrock. Bull Malone, his sidekick, would become his deputy. The Lone Avenger even had a junior Lone Avenger club in the comic.

The Lone Avenger debuted in Edwards’ flagship title, Action Comic. (At the risk of being obvious, the Action Comic released by Edwards is completely unrelated to the book that introduced Superman to the world.) Soon after, the character not only took over Action Comic, which had previously been an anthology title, but also generated a series of spin-off specials. 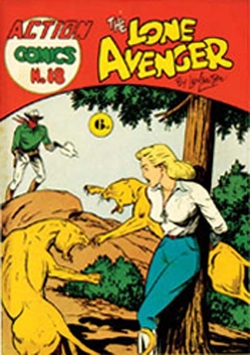 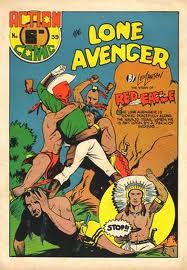 Lawson also created another masked Western vigilante hero for Edwards, The Hooded Rider, who appeared in later editions of Action Comic, as well as Diana: Queen of the Apes, King O’Rourke, Spencer Steele, and Peter Fury. But the success of The Lone Avenger reached beyond the comics. Like the fictional organization in the book, there was also a real life Junior Lone Avenger Fan Club with branches in New Zealand, Fiji, as well as Australia. These kids could buy Lone Avenger gun belts and costumes. 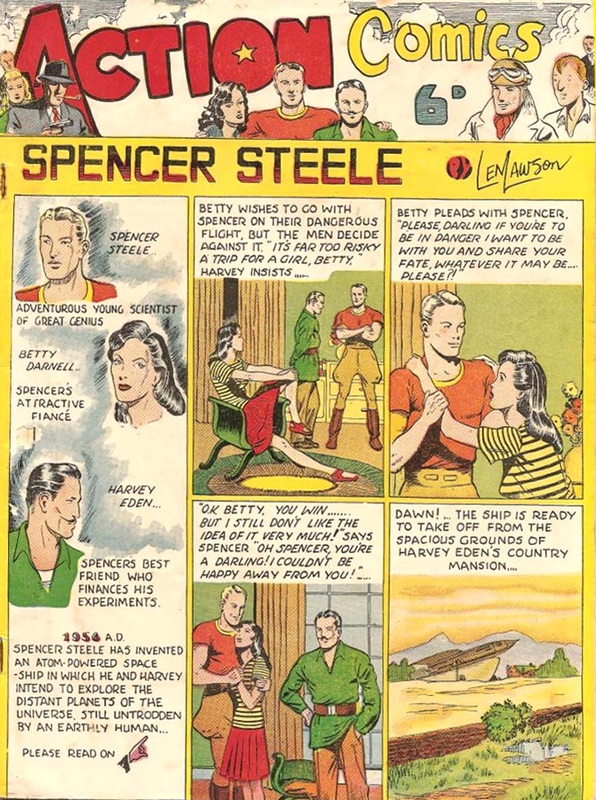 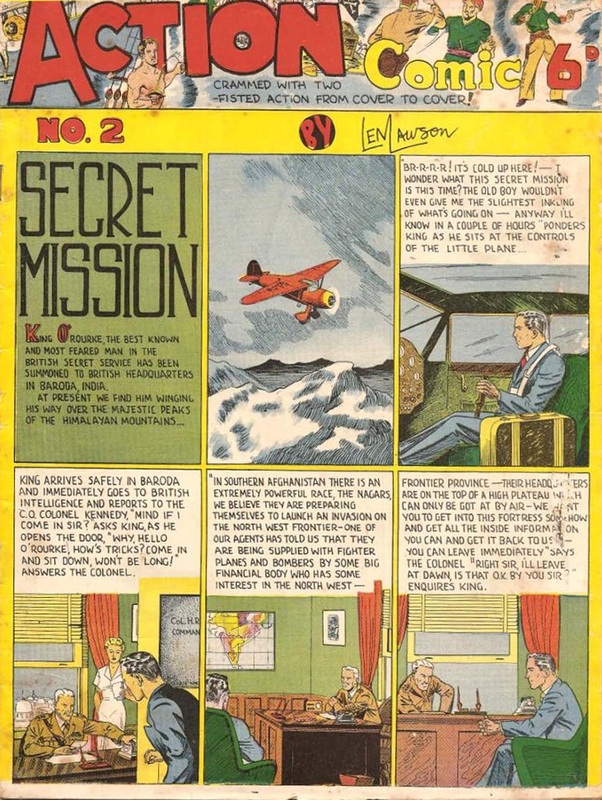 Sadly, Lawson was not as virtuous as his character. 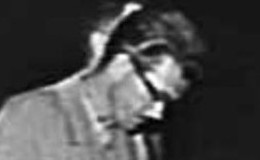 On May 7, 1954, at the age of 26, Lawson drove five female models from June Dally-Watkins to the Terrey Hills section of North Sydney. According to reports, Lawson bound and gagged the models at gunpoint and then raped three and indecently sexually assaulted the others. After being apprehended by police, Lawson was tried for the crimes in June 1954. At trial, the fact that Lawson made comic books was highlighted and one newspaper even described Lawson as “the artist of violent comics, which frequently depicted bosomy heroines.” On June 25, 1954, Lawson received the death penalty. The court also denied Lawson’s request to be allowed to continue to draw The Lone Avenger while in prison to support his family.

As a result of the trial, the media’s attention, and claims that Lawson’s comics contained graphic violence, there was a severe backlash against comic books and their creators in Australia. Lawmakers began to publicly scrutinize the Australian comic industry in a way that paralleled the public backlash against horror comics in the United States that was taking place around the same time. Comic publishers were denounced as pornographers and peddlers of escapist, dehumanizing mass culture that promoted sadism, violence, or militarism.

In response and as a further parallel to what was going on in the United States during the same period, the Australian industry attempted to self censor. Several publishers set up internal censorship committees to alleviate the public’s concern. Others adopted modified versions of the American Comics Code Authority. Still others reacted by establishing a Committee of Parents to sign off on each book. In addition, Gordon & Gotch (the largest distributors in Australia) created its own censorship panel to further review what had gotten passed the publishers’ censors.

Like the Comics Code Authority, some of the rules passed by these companies bordered on the absurd. For example, the Code of Ethics of Horowitz, Inc., provided that a character’s speech must be “free from slang, ungrammatical idiom and dialect.” The Code of Ethics also provided that “Even husband and wife should not normally be shown together in the bedroom. Plots involving divorce should be avoided, as they point towards a lack of family stability and are complicated and unsettling to the teenage mind.”

Despite these protective measures, the Australian States went ahead with their censorship legislation. The most aggressive of the new laws was in Queensland, where the government passed the Objectionable Literature Act. The Act established a Board of six to examine books (especially comic books) to determine whether they should be banned. The Board did not follow any uniform procedures and described that their decisions were made based on intuition. In the first nine months alone, the Queensland Literature Board of Review managed to ban 45 books, a third of which were comics).

Not surprisingly, The Lone Avenger was one of the first of these banned books and was officially listed on August 27, 1954. In an attempt to appease the other Australian States and continue the book, which had been taken over by Len Such after Lawson went to prison, publisher Edwards, along with it distributor, Gordon & Gotch, self-sanitized The Lone Avenger. Despite these efforts, The Lone Avenger soon rode off into the sunset, a victim of his creator’s crime. Indeed, the comic backlash was so bad that it would take thirty years for Australia to develop another local comic book industry. (It didn’t help that the embargo against the importing of American comics was lifted and the local comic creators again faced competition from America.)

Justice eventually found the Queensland Literature Board of Review in the form of a decision from Australia’s High Court. In December, 1954, the Literature Board of Review banned a set of teenage romance comics, including some that had passed the strict (if not ridiculous) Horwitz Code of Ethics. In response, three publishers sued the Board in Australia’s High Court, which found the actions of the Literature Board of Review laughable. In ruling for the comics industry, the court found that comics “may be an affront to readers’ intelligence or even eyesight, but certainly not a threat to their morals.” The Court also pointed to the fact that the Board did not outline what was excusable to standards and what wasn’t and was so arbitrary that it suppressed giveaway (free) speech.

Lawson’s tale does not end as well. Although initially receiving the death penalty, his sentence was commuted to 14 years imprisonment. But Lawson only served half this time and was paroled in May 1961 because he was considered to be a model prisoner. A mere six months later, on November 6, 1961, Lawson bound and raped 16-year-old Jane Bower and then stabbed her to death. The next day, Lawson took several girls hostage in the chapel of the Sydney Church of England Girls’ Grammar School at Moss Vale. During the encounter, Lawson struggled with a teacher and his gun went off, killing 15-year-old Wendy Sue Luscombe, a student who was sitting in the pews.

This time, Lawson was sentenced to life imprisonment for his crimes.

Tragically, imprisonment did not stop Lawson from committing further crimes. On December 15, 1972, a group of dancers arrived at his jail to give a concert for the inmates, including Lawson. After the show, Lawson held a dancer named Sharon Hamilton hostage at knife point. As a result of her ordeal, Hamilton sought extensive psychiatric treatment and would later commit suicide.

Lawson died in the Grafton Correctional Centre on November 29, 2003. His obituary reads:

Leonard Keith Lawson, a convicted rapist and murderer, died on Nov. 29 in his cell at the Grafton Correctional Centre in New South Wales. Authorities say he probably suffered a heart attack. He was 76.

Lawson worked as a successful commercial artist and photographer before he became a violent criminal. In 1954, he kidnapped five models, took them into the Terrey Hills bush in north Sydney and raped two of them at gunpoint; he also sexually assaulted the others. Originally sentenced to be executed, Lawson received a 14-year prison sentence after the death penalty was commuted. When he was released, Lawson used his artistic background to lure new victims.

On Nov. 7, 1962, while painting a portrait of 16-year-old Jane Bower, Lawson tied her up, sexually assaulted her then stabbed her to death. The next day, he carried a gun into the Sydney Church of England Girls’ Grammar School and took several students hostage. Fifteen-year-old Wendy Sue Luscombe, who was sitting in the chapel pews, was shot and killed during the siege. This time, Lawson received a life sentence.

Imprisonment didn’t curb Lawson’s violent tendencies. Ten years into his second incarceration, a group of dancers gave a concert for the inmates at his prison. At the end of the performance, Lawson jumped on stage and threatened to kill one of the dancers, Sharon Hamilton, with a knife. Although Hamilton was released unharmed, she committed suicide six years after the attack.

One of the oldest prisoners in Australia, Lawson spent 48 years in prison, and has been behind bars continuously since 1962. Several of his paintings currently hang at the prison where he died.

Lawson’s tale is tragic and full of victims. At least three innocent deaths can be tied to Lawson, not to mention the models and students he tormented. But there was another victim in this story: the Australian comics industry. Unlike the June Dally-Watkins models, Jane Bower, Wendy Sue Luscombe, or Sharon Hamilton, the comics industry was not attacked by a depraved criminal but by a well meaning government. And unlike Lawson, who died in prison, the perpetrator of the injustice against the comics industry is still at large.

Please help support CBLDF’s important First Amendment work and reporting on issues such as this bymaking a donation or becoming a member of the CBLDF!