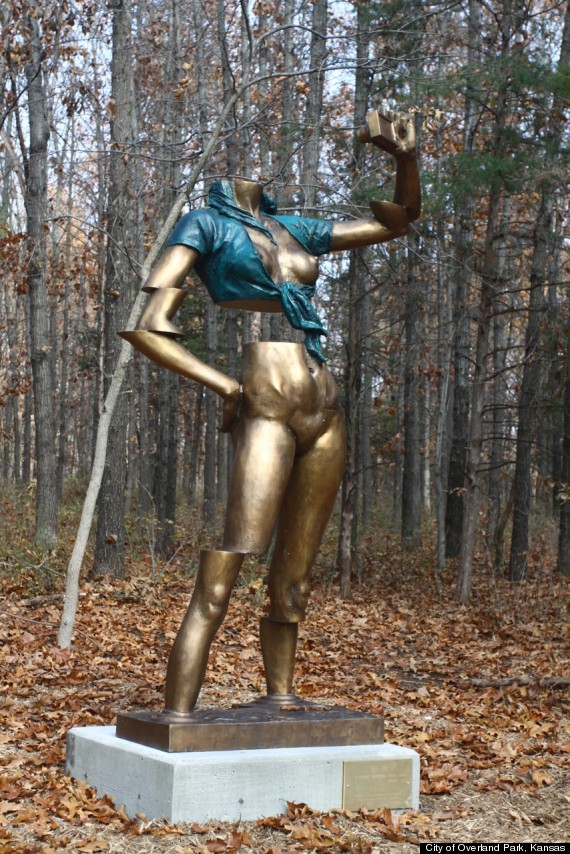 A sculpture depicting a partially-clothed woman snapping a picture of herself in an Overland Park, Kansas arboretum is drawing accusations from one local resident of “glorifying sexting,” and a petition against the work has now garnered enough signatures to trigger a grand jury obscenity investigation.

The sculpture, “Accept or Reject” by Yu Chang, is one of 11 sculptures recently donated by Chinese artists to the city-owned arboretum. It shows a headless and fragmented woman, breasts exposed, aiming a camera towards where her head should be. Proponents of the petition, including originator Joanne Hughes and state American Family Association director Phillip Cosby, claim that the statue is ‘sexting’ — sending naked pictures of herself via text message — even though she is using a camera and not a phone. Hughes and Cosby have availed themselves of a Kansas law whereby “citizens can initiate a grand jury investigation if they collect signatures from more than two percent of the county’s voters.” Grand juries do not determine guilt or innocence, but decide whether an indictment and full trial are warranted.

Since then, Cosby has launched obscenity investigations against businesses across Kansas, including liquor stores, gas station/convenience stores, smoke shops, a Spirit Halloween franchise, and a Latino market called El Gringo Loco. Some grand juries — including in Johnson County, where Overland Park is located — did bring charges, but those too were eventually dropped. Evidently Cosby has decided to move on and target public art, but due to the very high standard for proving obscenity, he is even less likely to succeed in his newest investigation.

A concrete legal definition of obscenity has long been something of a Holy Grail for First Amendment defenders and would-be censors alike. Obscene materials are among the few categories of expression that are not protected by law, but no one can say exactly where the line between obscene and not-obscene is–although it’s certainly moved quite a bit since James Joyce’s Ulysses was effectively banned from publication in the 1920s. Perhaps most famously, Supreme Court Justice Potter Stewart wrote in his concurring opinion for Jacobellis v. Ohio (1964) that while he could not define what sort of material should be excluded from protection, “I know it when I see it.”

But one thing is certain: the obscenity bar is higher than most people realize. Many pornographic films are not legally obscene; nor are Hustler and Playboy. This is because courts now attempt to determine obscenity using the three-pronged Miller test, devised in the 1973 Supreme Court case Miller v. California. For a work to be labeled obscene, it must meet all three conditions (emphasis added):

Considering this standard, a partially clothed statue taking a picture of herself isn’t even in the same universe as actual obscene material. Depending on the “average person” (another one that’s hard to define) and the community, “Accept or Reject” might be perceived as fulfilling the first condition — although it seems just as likely that our hypothetical viewer would recognize that works of art have multiple layers of meaning. In any case, the sculpture does not meet the other two conditions: the woman is not engaged in any sexual conduct at all, and no court is likely to find that the piece lacks artistic value.

Joanne Hughes, the local resident who started the petition, says that she would not object to a classical nude like Michelangelo’s “David” because “he’s…not taking a picture of his penis. There is a difference there. The message is different.” Quite apart from the question of whether the sculpture is obscene, those who want it removed from the publicly-owned arboretum seem to be unaware that it echoes several other works of past centuries. The backlash against non-classical nudity, for example, is reminiscent of the harsh criticism that greeted Manet’s “Olympia” in 1865.

Also, while the statue is not ‘sexting,’ she is indeed taking a picture of herself with an outstretched arm–a pose strikingly similar to the one frequently taken by the Renaissance personification of Vanity, a nude woman admiring herself in a hand mirror. While art is of course open to different interpretations, “Accept or Reject” can be seen as an update of this allegory for the digital era. Instead of simply looking at her own image, the woman now seeks approval of her body from others — most likely on dating or social media sites, considering the title of the work. In the process, she loses her identity and becomes simply a pair of breasts to be ogled by online strangers. An article from the Kansas City Star notes that to many viewers, the artist’s message seems to be quite the opposite of what Hughes, Cosby, and their supporters see:

Rather than promoting sexting, the sculpture is meant to point out the danger of digital technology and social media — how in fragmenting individuals into separate parts, including their sexuality, people can lose part of their humanity and individuality. The fact that the woman in the sculpture has no head underscores this point.

For its part, the city of Overland Park seems to be standing firm in the face of the investigation and the calls for censorship. Says city spokesman Sean Reilly: “The statue does exactly what art is supposed to do. It’s evoked a lot of emotion.” It is highly likely that a grand jury will soon come to the same conclusion.