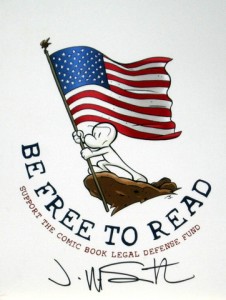 Bone creator Jeff Smith is asking you to join him in protecting the Freedom to Read by joining the Comic Book Legal Defense Fund during their Be Counted membership drive.  Jeff’s beloved series Bone is one of the most acclaimed graphic novel series of all times — and one of the most challenged.  In recent years the series has come under fire in libraries, including a 2012 incident in Texas where the series was restricted.  While supplies last, Smith will offer a signed “BE FREE TO READ” print featuring Fone Bone for members who join at the Supporter ($50) or a personalized postcard sketch to members who join the CBLDF at the Defender ($250) level.

Smith says, “The work CBLDF does to protect the freedom to read comics is essential.  I support the CBLDF because they protect the rights of readers of all ages, and I hope you’ll join me by becoming a member at whatever level you can afford.  For as little as $25 a year, your CBLDF membership will help ensure that they can continue to speak up for our rights when they’re threatened.  Please join me in supporting their work — it’s important, and they can’t do it without us.”

CBLDF speaks in defense of comics and the librarians who collect them when they come under attack.  CBLDF has spoken out against the ban of the graphic novel SideScrollers in Connecticut, and published dozens of resources as part of our sponsorship of Banned Books Week.  Last week we wrote a letter of support for a Seattle library that stood up for intellectual freedom in the face of an attack on manga in its adult collection. The CBLDF’s work is vital, and the call for it is increasing.  Your support is needed to help ensure we can perform our important mission.