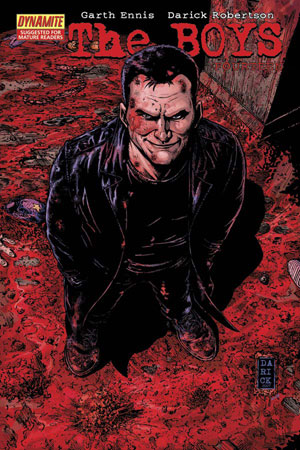 When comics fan Patricia Donahue ordered 11 issues of Garth Ennis and Darick Robertson’s The Boys, she didn’t expect to be denied the books by Qatar’s Ministry of Culture. However, that’s exactly what happened according to a letter she wrote to Bleeding Cool.

The Boys is Ennis and Robertson’s tale of a group of individuals tasked with monitoring superheroes, taking action to counteract the reckless and inappropriate behavior that comes with stardom and superpowers. The series is marked by dark humor, violence, and sexual content. The violent and sexual content that characterizes the book is what led to its seizure in Qatar.

Doanhue took two trips to Qatar’s Ministry of Culture to pick up her books. She writes of her first visit:

The first time I went to the Ministry of Culture to try and pick the comics up, I had to walk around showing everyone the customs paper that said “sexual magazine” in Arabic. Each person would stop, stare at me, look at the paper, look back at me, call someone over, show them the paper and stare again. I’m a tall, skinny white girl that looks 25.

Upon her second visit, Donahue was not allowed to take the books home. They were placed in a box labeled “banned.” After being showed which pages were found offensive by members of the Ministry — Donahue notes that it was pretty much “all of them” — Donahue couldn’t even get the books so she could return them for a refund.

You can read the entirety of Donahue’s letter here. While Donahue recognized the ironic humor of the seizure, she was justifiably annoyed at being denied her books. Such actions by customs officials are certainly disturbing, whether that border is in Qatar, Canada, or even here in the United States. This erosion of the right to free speech serves as yet another reminder that the battle against censorship is a long one.