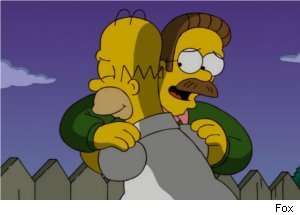 British broadcaster Channel 4 recently censored the word “gay” during a recent airing of The Simpsons, according to an article from The Independent. The censored episode, which originally aired in 1994, was run during the midday Sunday programming on the channel and featured a burgeoning friendship between Homer Simpson and Ned Flanders.

In the episode, the term was used in reference to homosexuality and played into a running gag regarding the sexuality of secondary characters Lenny and Carl. It was not used as a negative slur. Since its airing, Channel 4 has expressed regret over the overly cautious actions of its compliance department and the censorship of the episode.

The censorship brings to light the fraught relationship that many in the UK have with the use of the word “gay” and other types of controversial expression. The Independent writes:

Rowan Atkinson is lobbying for the repeal of section 5 of the Public Order Act, which makes it an offence to use insulting words or behaviour and once resulted in the arrest of a student who called a police horse “gay”.

For more on the story, visit The Independent here.

It’s hard to imagine the censorship of The Simpsons or someone being arrested for the use of negative language or profanity in the United States, but it has happened before. Books — including graphic novels — are still frequently challenged in libraries over objectionable language, whether that language is profane or something that simply makes a reader uncomfortable. Fortunately, organizations such as the CBLDF help protect such protected speech!