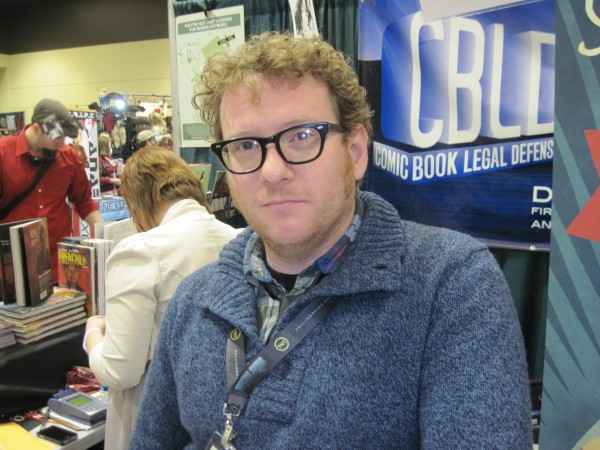 Recently, CBLDF Deputy Director Alex Cox took a moment out of his busy schedule planning the Fund’s fundraising efforts and convention appearances to talk to The Comics Reporter’s Tom Spurgeon about CBLDF and his upbringing as one of four or five comics fans in rural Tennessee.

During the interview, Cox described what makes a good convention appearance for CBLDF:

Our show presence is split between fundraising and programming. Raising a lot of dollars is great, but we are happiest when we raise a lot of dollars but also pack a program hall full of people who leave knowing more than they did when they walked in. When we have great volunteers who can speak clearly about our mission, increase our membership, run a few informative panels, and raise money, we’ve had a good weekend. When we have a room full of people who are not sure who we are, that’s great; that’s an opportunity to educate and expand our membership base. That means the Con organizers are doing an amazing job bringing in new fans, and it means we are reaching a new audience. It’s win-win-win, all around.

He further describes the enthusiasm CBLDF encounters at conventions:

I’ve found that people are, 999 times out of 1000, encouraged and excited by our mission. And the one in a thousand that isn’t excited still understands why the work is important. The First Amendment protects the most basic human rights, and people get fired up about it. When we give people the history of the CBLDF, and tell them about artists who were prosecuted just for lines on paper, it’s shocking. I know that personally, I find censorship completely disgusting, and I have yet to find a compelling argument for the restraint of artistic content. And I’ve found that in talking to comics fans, almost everyone feels the same way, when you have the conversation.

Cox shared some thoughts on his experience as a comics retailer during his tenure with Rocketship in Brooklyn, New York, and the importance of retailer support for CBLDF:

…Retailers come through big-time every year, and our Retailer Membership numbers for 2012 are higher than ever. I would say the relationship between the Fund and the retail community is not only robust, but a big, warm bear hug, financially and in terms of program support. As you know, the Fund was started when a retailer was attacked by local law enforcement, and protecting the rights of the Direct Market is a big chunk of our mission. Retailers know that, and support us as brothers-in-arms. In the past year, we’ve seen our relationship with ComicsPRO grow substantially, and the members of that organization really are industry leaders, and do important work.

And on a personal level, I love comic shops, and I love comic retailers. I love working with them, and when we need help, especially when we are on the road and out of our element, we can always count on a LCS to come through in a pinch.

You can read the entirety of Cox’s December 24 interview with The Comics Reporter here.

← Unwrap a Gift From CBLDF!
Evidence Does Not Support Link Between Video Games and Violent Crime →