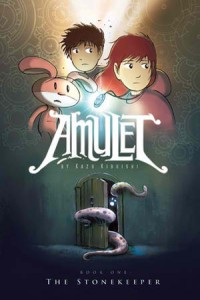 Even as comics and graphic novels have moved out of their niche market and into the mainstream of publishing over the last twenty years or so, they have admittedly been slow to catch on in some libraries. In many cases, the resistance comes not from the librarians who are actually responsible for collection development, but from administrators who set the budget and can veto purchases. Particularly in schools, there is a persistent perception that comics are not sufficiently edifying for inclusion in a library collection. To aid in countering this misapprehension, GraphicNovelReporter.com has a new interview with Ontario, Canada, school librarian Tameka To about her students’ enthusiastic response to the collections of comics, graphic novels, and a few manga that she has built in the four libraries she oversees.

Before she added the graphic novel collections, To says, “maybe 10% of the grade 7 and 8 students (boys) would voluntarily sign out a book.” This changed dramatically once the boys found out they could get the latest Bone or Amulet in the library:

After the graphic novel trend started catching on, I would say approximately 75% of the boys were regularly coming in for the comic books. I had a principal once ask me for proof that they boys were reading ‘these silly comic books’ and I told her to go into the grade 8 room during their silent reading time and see how quiet it is. The proof is also in the fact that despite just spending hundreds of dollars on the collection, the shelf always looks empty.

Students who had been reluctant readers in the past were finding out that reading could be fun, and To was only too happy to provide them with books they would read by choice rather than by assignment. Most middle grade teachers and principals were also enthusiastic, but the school board took some convincing:

They were so concerned about inappropriate pictures that they insisted if we wanted to purchase them we had to look on every page for unsuitable content. Since I was working at four school libraries at the time, it was simply impossible to do. Luckily I discovered a store in Toronto that evaluates every book and takes care of content concerns.

Somewhat surprisingly, To also met some resistance from teachers of younger students, who thought that new readers might be “spoiled” by reading comics:

I am always trying to prove to them that if they let their kids read a comic book it doesn’t mean they will never ever read anything else. The majority of the time we end up compromising and let them take out two books with one being a graphic novel. They don’t have a problem letting the kids take out pictures books that are too hard for them to read so I don’t see the difference between that and graphic novels. Some teachers still try to convince me that they are not worth reading, but I usually tell them that if the kids are excited about them it is worth reading.

We at CBLDF are always thrilled to see librarians defending comics as worthwhile reading! The entire interview can be found here.