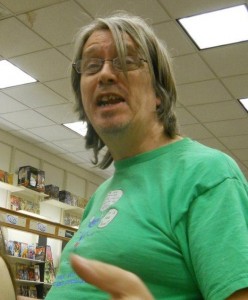 The CBLDF is sad to note the passing of Gordon Lee, owner of the Rome, GA comic book store Legends.  Lee successfully stood up to false charges of distributing harmful to minors materials in a case that CBLDF managed from 2005 through 2007. Lee passed Sunday afternoon following complications from a series of strokes.  He was 54 years old.

CBLDF Executive Director Charles Brownstein says, “This is very sad news.  Gordon showed an admirable strength of character in my dealings with him.  He withstood not only the extreme stress of answering the false charges that local prosecutors brought against him, but a tide of negative public opinion in the comics community because of the allegations he faced.  Gordon could have pleaded out at any moment, and saved himself and his family the pain of going through the legal process.  He didn’t because he knew he was innocent of the charges he faced, and he wanted to fight back so other retailers didn’t need to face a case like his.  In the end, he was vindicated — the charges were dropped, the tide of public opinion turned, and no other case like it has been brought against a retailer since then.  But getting there took a great deal of personal strength. Our most sincere condolences go out to his family and friends.”

← Rockefeller Bill Dead, But Not For Long
Move by Tucson School Board May Mean Overturn of Book Ban →