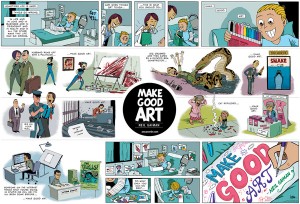 In a recent post on his personal blog, CBLDF Advisory Board member Chip Kidd related a pretty cool story about an Australian cartoonist, Neil Gaiman, and a poster of Gaiman’s famous speech about making good art. Kidd writes:

Back in May of 2012 [cartoonist Gavin Aung Than] had seen the (now famous) speech of the bestselling author, Neil Gaiman, who delivered a special commencement address at Philadelphia’s University of the Arts, in which he shared his thoughts about creativity, bravery, and strength. He encouraged the fledgling painters, musicians, writers, and dreamers to break rules and think outside the box. Most of all, he urged them to “Make Good Art”. Now, after seeing this speech, Gavin was inspired to create a special comic strip quoting a small portion of Gaiman’s address. I mean, the speech was about, “Hey! Go Make some ART”, so he did! You can read that COMIC STRIP by clicking right HERE.

When Aung Than approached Gaiman about selling poster versions of his strip, Gaiman had one caveat: A portion of the proceeds must benefit CBLDF’s important First Amendment work!

The poster is available in five sizes, set to fit in any space you have to decorate. You can order your copies here. Half of the proceeds from all sales are being donated to CBLDF!

For more about the print and the story behind it, visit Chip Kidd’s website. Kidd is also the designer behind Neil Gaiman’s MAKE GOOD ART Speech, a book version of Gaiman’s speech that will be out in May.