Marjane Satrapi wrote Persepolis not just to share her personal experiences growing up in Iran but also to make human the people of a country that has been otherwise vilified around the globe. Satrapi recently spoke with Khury Petersen-Smith with the SocialistWorker.org. In the interview, Satrapi acknowledges the popularity of Persepolis in the United States and her incredulity at the attempt by Chicago Public Schools to remove the book:

So that’s why this whole story in Chicago was absolutely shocking to me. They’re saying it’s inappropriate for kids because of the scenes of torture that were in just a couple of frames–in a book that is 200 pages long!

Satrapi further describes why the attempted ban is so appalling, especially in the context of American culture, calling to mind the inconsistent nature of such bans:

It’s as if children never killed anybody in their video games, or as if they had never seen any films that contain violence. As you know, in America, kids can watch violent movies, and it’s not a problem, but if you say the word “fuck,” that is unacceptable. Children are exposed to violence. But if it’s the violence of guns on TV, that is accepted.

As Satrapi continues her passionate defense of Persepolis, she discusses how the CPS requirement for special training in order to teach the book in the 11th and 12th grade classrooms for which its use has been approved amounts to a ban in and of itself:

The worst part is they say that they haven’t banned the book, but each teacher who wants to teach it will have to get some kind of guidance. That means they make it difficult. If I’m a teacher, and I have to go get guidance to teach a book, then I will teach another book. This is just another way of banning it.

In the interview, Satrapi berates CPS for insulting the intelligence of its teachers and students. She further ponders what CPS is so concerned about that teachers need special training to use the book. She reiterates that her book doesn’t teach readers to be violent or to hate. Instead, Persepolis teaches readers to find alternate ways to deal with the violence around them, emphasizing that hate is not the route to follow.

Petersen-Smith and Satrapi also discussed the muddled nature of the CPS ban, with initial reports indicating that the book was to be pulled from both classrooms and libraries, and CPS’s revised directives that kept the book in libraries. While CPS has denied banning the book outright since it has only been removed from 7th grade classrooms and it has been retained in libraries, Satrapi asks, “So what do we do for the 160 schools that they don’t have any libraries?”

Satrapi then describes the danger of letting few dictate policies for many: 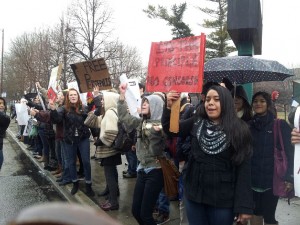 You can read the entirety of Satrapi’s impassioned interview here. In closing the interview, she has a message to all of the parties involved:

To the administrators I would say: Find your brain again. Stop lying, stop being hypocritical, and trust the young people. Read the book first and don’t just be shocked by one picture. Read it first, and then, if you really are shocked, don’t teach it. But I’m sure these people didn’t even read it.

I would say to the children that I trust them–and I really trust that they will make a better world. I think they are very intelligent, and I really believe in young people.

To the teachers, I would say that I respect them more than anyone in the world because this is really not an easy job to do. Thanks to people like them–they saved my life.