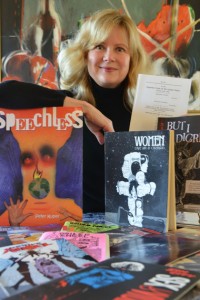 Susan Alston has a long history with CBLDF. The Fund’s first Executive Director, a former Board of Directors member, and now a member of the CBLDF Advisory Board, Alston has watched the Fund grow from a tiny operation that ran out of her Northampton garage into a New York City-based organization that has become a touchstone for free speech advocacy.

Fred Contrada with The Republican profiled Alston in a recent article, bringing to light how much the Fund has grown and Alston’s ongoing role with the organization. In the article, Contrada describes Alston’s route to the Fund through Teenage Mutant Ninja Turtle publisher Tundra, which eventually merged with Kitchen Sink Press. There, Alston met CBLDF founder Denis Kitchen, who asked her to oversee the Fund.

For a couple of years, Alston ran the fund out of a detached garage at her Northampton home on Prospect Street.

“I had a 50-foot phone cord I used to plug everything in,” she said. “In the winter, I’d haul it over snow banks.”

As a member of the Advisory Board, Alston remains as adamantly committed to CBLDF as she was when she was directed the organization. She tells Contrada:

“When people talk about comic books, it’s not just for children but has a whole adult theme,” said Alston. “We try to make people aware that when their First Amendment rights are infringed on, they can call the Comic Book Legal Defense Fund.”

You can read the entirety of the profile here. For more on the CBLDF Advisory Board, check out this article.