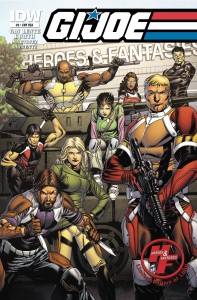 At a private event last March, IDW presented a unique opportunity to retailers: the chance for their store to appear in an issue of GI Joe. The retailer donated the most to CBLDF would win the spot. Heroes & Fantasies in San Antonio, Texas, took the win, donating $2,000 to CBLDF’s fight in defense of free speech.

When asked by Jennifer A. Luna with the San Antonio Express-News about why the store donated, store manager Adam Conley noted that “[CBLDF]’s important for any store that plans to sticks around.” 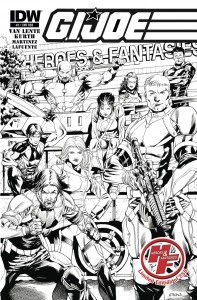 GI Joe #5 hit shelves last week, and Heroes & Fantasies is featured on two retailer-exclusive variant covers drawn by Robert Atkins. The color version is limited to 1,000 copies, with an ultra-rare black and white variant that is limited to 250 copies. To celebrate the release, Heroes & Fantasies partnered with Alamo City Comic Con to host a Military Appreciation Day last weekend. Writer Fred Van Lente and Atkins will also be signing at the store on June 29.

CBLDF would like to thank the wonderful folks at Heroes & Fantasies, IDW, and Van Lente, Atkins, and the rest of the GI Joe creative team for their support of our fight on behalf of the First Amendment!