Last week, people around the country celebrate Banned Books Week. Gene Luen Yang was among the celebrants, and he took a moment to create original art for a guest post on poet E. Kristin Anderson’s blog. Check out the art below and join Yang to BE COUNTED in the fight against censorship!

Yang was a National Book Award finalist for American Born Chinese, an acclaimed graphic novel that has not yet been challenged or banned, but it has been criticized for the use of ethnic stereotypes. CBLDF featured the book in our “Using Graphic Novels in Education” column, which you can read here. Recently, Yang’s Boxers & Saints became the only graphic novel longlisted for the National Book Award for Young People’s Literature.

Yang is an outspoken advocate for the freedom to read, as you can see from his Banned Books Week strip: 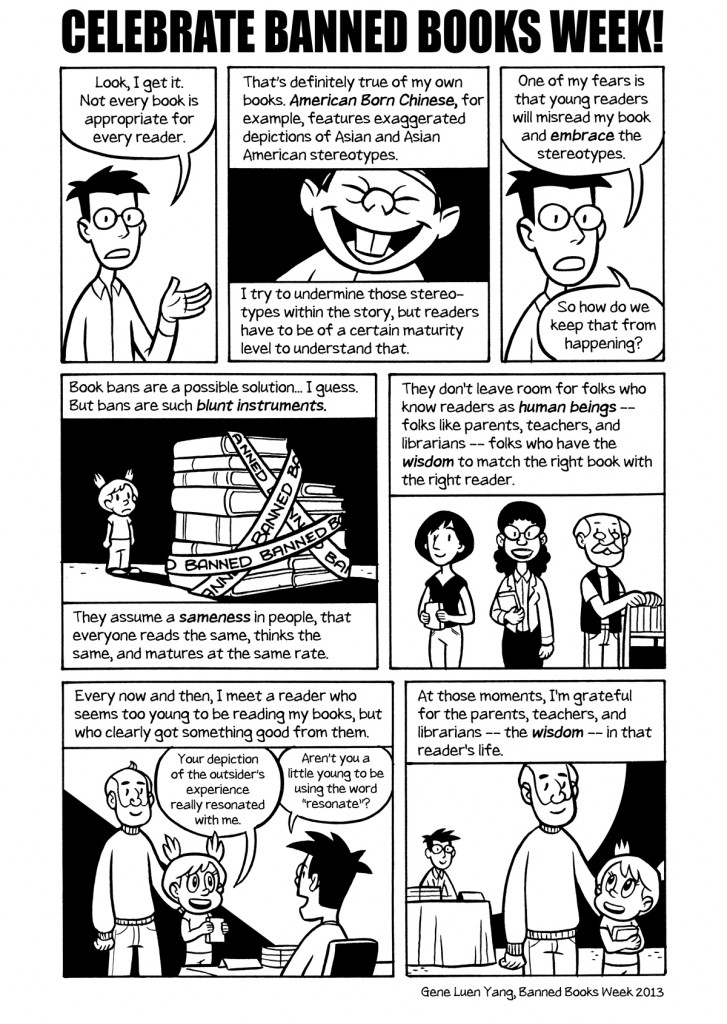 Many thanks to Gina Gagliano at First Second Books for bringing this amazing piece to our attention! The awesome folks at First Second also caught Gene signing a giant stack of books for CBLDF during Brooklyn Book Fest: 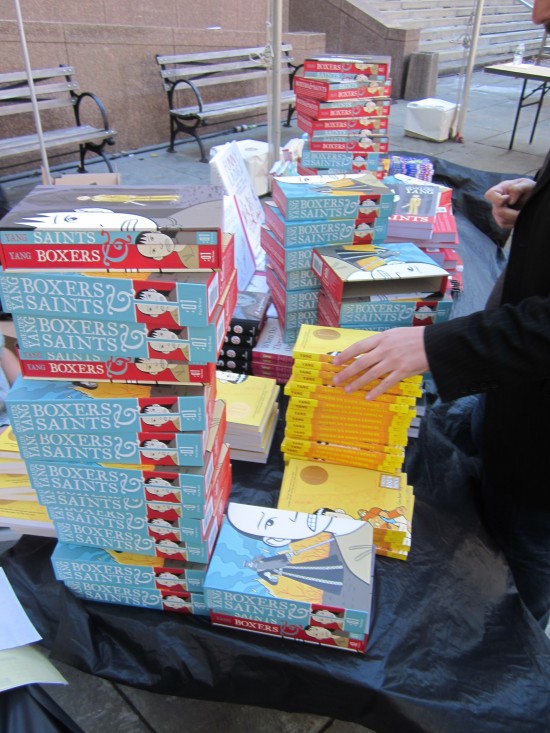 BE COUNTED! Join the Fund during our 2013 Be Counted member drive and we’ll help schools and libraries in your community by sending them copies of our education resources Raising A Reader or Manga: Introduction, Challenges, & Best Practices – two of our most recent tools for advancing literacy and fighting censorship. We’ll also thank you by sending outstanding premiums from one of our generous author supporters. This week, we’re featuring Gene Yang!

This Membership level comes with the standard $50 membership kit, plus 10 copies of the RAISING A READER education program magazine to the school or library of your choice!

This also comes with American Born Chinese, signed by Gene Yang or the print of your choice: BABYMOUSE, signed by either Jennifer and Matthew Holm, or Lil’ Liberty, signed by Raina Telgemeier!

This Membership level comes with the standard $100 membership kit, plus 25 copies of the RAISING A READER education program magazine OR 1 copy of CBLDF PRESENTS: MANGA to the school or library of your choice!

If you’re already a member, CBLDF also has signed copies of Gene Yang’s books in our Rewards  Zone:

← Get Amazing Manga Gifts At Kinokuniya NYC’s CBLDF Member Drive This Saturday!
Jeff Smith Named To CBLDF Board of Directors →