Designer Michael Dooley recently reexamined some of the comics titles attacked by Fredric Wertham in his 1954 “expose” on comics, Seduction of the Innocent. Wertham’s condemnation of comics led to decades of self-censorship by the comics industry.

In examining the titles that Wertham targeted, Dooley noted variability in the quality of the books, but also noted that there’s no justification for censorship:

…it’s time to take a fresh look at the text of this nearly 60 year old document—and naturally, at those evil, decadent comics he referenced —for a contemporary perspective on just how graphic these images actually were.

Some stories were literate, clever, well illustrated and worthy of respect; the EC line, for example. But many others were vulgar and poorly drawn, with gratuitous violence and crude depictions of women and minorities. Obviously, parents should—and must—decide what their children are exposed to, and at what ages. But instituting formal censorship is another matter entirely.

Let’s take a look at some of the highlights from the two-article series. Let’s start with one of Wertham’s frequent targets, Batman: 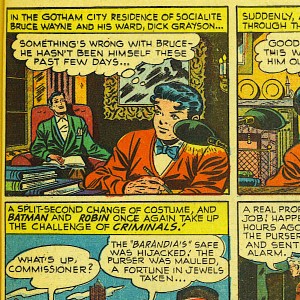 Sometimes Batman ends up in bed injured and young Robin is shown sitting next to him. At home they lead an idyllic life. They are Bruce Wayne and “Dick” Grayson. Bruce Wayne is described as a “socialite” and the official relationship is that Dick is Bruce’s ward. They live in sumptuous quarters, with beautiful flowers in large vases, and have a butler, Alfred. Batman is sometimes shown in a dressing gown. As they sit by the fireplace the young boy sometimes worries about his partner: “Something’s wrong with Bruce. He hasn’t been himself these past few days.” It is like a wish dream of two homosexuals living together. 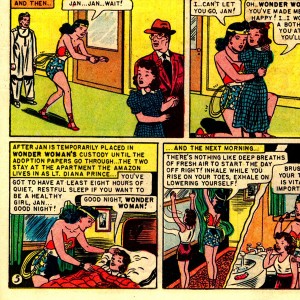 As to the “advanced femininity,” what are the activities in comic books which women “indulge in on an equal footing with men”? They do not work. They are not homemakers. They do not bring up a family. Mother-love is entirely absent. Even when Wonder Woman adopts a girl there are Lesbian overtones.

Wertham makes reference to Nazis in discussing Superman, which is ironic given that Superman’s creators were the children of Jewish immigrants: 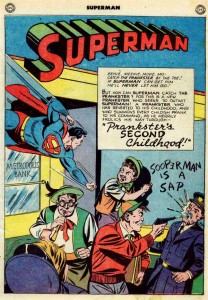 Actually, Superman (with the big S on his uniform—we should, I suppose, be thankful that it is not an S.S.) needs an endless stream of ever new submen, criminals and “foreign-looking” people not only to justify his existence but even to make it possible. It is this feature that engenders in children either one or the other of two attitudes: either they fantasy themselves as supermen, with the attendant prejudices against the submen, or it makes them submissive and receptive to the blandishments of strong men who will solve all their social problems for them—by force.

Wertham blamed comics for many things, including a rash of intentional eye injuries inflicted by children: 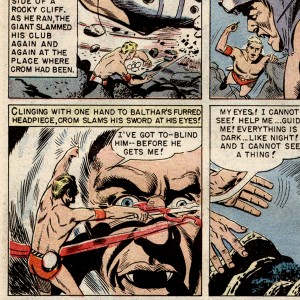 Children have done deliberate harm to the eyes of other children, an occurrence which before the advent of crime comics I had never encountered among the thousands of children I examined. On a number of occasions I have asked juveniles who used homemade zip guns what harm they could do with so little power. I received prompt reply: “You shoot in the eye. Then it works.”

The children of the early 40s pointed out the injury-to-the-eye to us as something horrible. The children of 1954 take it for granted. A generation is being desensitized by these literal horror images. One comic shows a man slashing another man across the eyeballs with a sword. The victim: “MY EYES! I cannot see!”

According to Wertham, comics were also a cause of domestic violence: 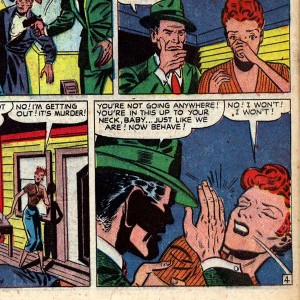 The act most characteristic of the brutal attitude portrayed by comic books is to smack a girl in the face with your hand. Whatever else may happen, afterwards, no man is ever blamed for this. On the contrary, such behavior is glamorized as big-shot stuff in the context, and enhances the strength and prestige of the boy or man who does it.

In a comic book Authorized by the Association of Comics Magazine Publishers this lesson is driven home. A young girl is being initiated as a confederate into the slot-machine protection racket. She sees how her friend beats up an old man, knocks off his glasses, etc. At first she does not like it. But later, after she had seen such brutal treatment repeated as routine in the racket, she says: “One gets accustomed to brutality after a while!” That is one instance where I agree with a comic-book character.

Dooley featured dozens more books in his two-article series on Seduction of the Innocent. You can view the articles here:

The Comics that Corrupted Our Kids!

Cover Your Eyes: the Graphic Horrors of 1950s Comics

By modern standards, Wertham’s attacks on comics seem quaint, but the impact if his work was profoundly negative. Decades of self-censorship by the comics industry squelched creative expression and nearly led to the demise of the medium. If you’re at New York Comic Con today, don’t miss CBLDF’s discussion of Wertham’s attack on comics: