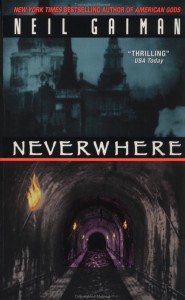 Last week, CBLDF learned that Neil Gaiman’s Neverwhere was under attack at Alamogordo High School in New Mexico. A parent filed a complaint over the book, claiming the content was “rated R” and inappropriate for her 15-year-old daughter. The book was subsequently removed for review.

Over the weekend, more details in the challenge emerged. Michael Johnson with Alamogordo newsource Daily News reached out to Nancy Wilmott, the parent who filed the complaint:

“I really think that the school needs to let the parents know what their students are going to read beforehand, not the day before or after,” Wilmott wrote in an e-mail to the Daily News. “I am not a closed-minded parent that thinks my kids should hear no evil. Just not something with such graphic detail — a intimate situation between two adults.”

Wilmott took exception to a passage on p. 86 of the paperback edition of the book, which reads as follows:

A late-night couple, who had been slowly walking along the Embankment toward them, holding hands, sat down in the middle of the bench, between Richard and Anaesthesia, and commenced to kiss each other, passionately. “Excuse me,” said Richard to them. The man had his hand inside the woman’s sweater and was moving it around enthusiastically, a lone traveler discovering an unexplored continent. “I want my life back,” Richard told the couple.

“I love you,” said the man to the woman.

“But your wife–” she said, licking the side of his face.

“Don’ wanna fuck her,” said the woman, and she giggled, drunkenly. “Wanna fuck you….” She put a hand on his crotch and giggled some more.

Neverwhere has been on the school’s reading list since 2004 based on a recommendation from the textbook program that the school uses, but this is the first complaint it has received. Wilmott’s complaint is not focused on the work as a whole, only on the content on p. 86; no other passages appear to be under contention.

“I reviewed the language personally. I can see where it could be considered offensive,” he said. “The F-word is used. There is a description of a sexual encounter that is pretty descriptive, and it’s between a married man and a single woman. Although kids can probably see that on TV anytime they want, we are a public school using taxpayer dollars.

“On that basis, we have decided to temporarily remove the book until we can review it with our panels and make a decision.”

The school appears to have a waiver system by which another book can be selected, but Wilmott claims that she was not given the opportunity for a waiver until after her daughter began reading the book. The instructor of the course assigned a new book to Wilmott’s daughter after she learned of the complaint through indirect channels, but at no point was the instructor approached by the parent. Wilmott took her complaint directly to the administration.

AHS Principal Darian Jaramillo is not speaking to media, but Daily News received an email that she sent to staffers in the school informing them that Neverwhere should be removed from shelves and classrooms and that teachers should send letters informing parents about controversial material:

“From here forward, if you are reading any material that has a controversial issues [sic] or adult language/content, please send a letter home to parents about that specific book and what the content is,” [Jaramillo] wrote.

Most teachers would be hard pressed to find a book that doesn’t fit this description, and some teachers in the system are already voicing their concerns over the removal and Wilmott’s allegations that teachers and administrators in the school system have acted irresponsibly. Pam Thorp, an English teacher at AHS is one of the most vocal. From Daily News:

“I cannot and will not condone the censorship this parent is promoting,” she said. “The implication that we are careless or irresponsible simply is not true. Presenting challenging material of merit that may contain some foul language or mature situations, in a sensitive and academic manner, is part of our responsibility to our students in order to engage them in evaluating the human condition. I take that responsibility very seriously and strive every day to encourage my students to think … about the world, about their community, about their friends and about themselves. Censorship is the opposite of that.”

CBLDF learned of the removal late last week after a biased news report by CBS affiliate KRQE News 13 in Albuquerque, New Mexico, was posted online. (You can view the report here.) Upon hearing of the ban, Neil Gaiman took to Twitter, asking, “Is anyone fighting back?” You can expect CBLDF among those who will be fighting the ban, and we’ll keep you posted as the story develops.