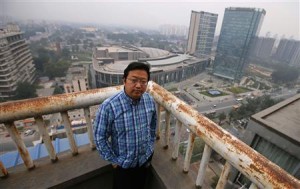 China has long drawn fire for policies that lead to rampant censorship, whether government sanctioned or self-imposed. Recently, a cartoonist fell victim to the country’s crackdown on bloggers.

In the last few months, hundreds of people have been detained for “rumor-mongering” and dissent against the government. Earlier this month, cartoonist Wang Liming was taken into custody for forwarding a microblog post about a mother whose baby had starved in the wake of a flood.

Wang was released a day after he was taken into custody, but he was furious abou the detention. From Sui-Lee Wee with Reuters:

“I told (the police), ‘How can I be causing a disturbance? All I did was post a microblog’,” he told Reuters in an interview late on Tuesday.

Wang said he was furious that the Yuyao government was not providing enough relief and was concealing the truth, so he posted a microblog on Tencent’s Weibo chat service. The Yuyao government later said on its official Weibo account that Wang’s posting was a rumour.

Like many in China, Wang has used Winnie the Pooh to depict China’s president, Xi Jinping. His images were among many that were deleted when Chinese censors scrubbed references to Pooh and Tigger from microblogs and websites.

Wang has been questioned before regarding the possible dissent represented by his work. He recognizes the risk but is adamant about his desire to continue to create in spite of censorship, as he tells Wee:

Wang said he knows his work has the potential to anger government officials and could put him in jeopardy, but at the same time, he cannot imagine a life of not drawing.

“Many times, I tried to convince myself not to touch it anymore,” Wang said. “But after a few days, I can’t help it, I’m still concerned about these things. Perhaps it’s the desire for a person to speak the truth, to express himself. This is very difficult to control.”

You can read the entirety of Wee’s article here.