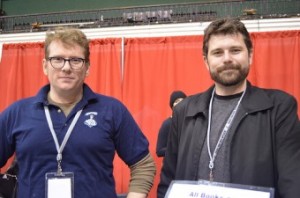 Recently, Publisher Weekly‘s Calvin Reid took a moment to spotlight CBLDF’s work on behalf of the freedom to read. It’s been a busy year for CBLDF as we’ve worked to defend comics and books in libraries and schools and to help educate people about graphic novels and manga.

“We’re first responders,” said Charles Brownstein, executive director of the Comic Book Legal Defense Fund (CBLDF), an organization devoted to protecting the First Amendment rights of comics artists, publishers, retailers, librarians, and fans. “We continue to respond immediately to crises. But we’re adding education programs and other tools to prevent these kinds of threats before they can grow.” When he says “threats,” Brownstein means what he views as the unlawful seizure of comics by law enforcement officials or custom agents, as well as efforts to remove comics from libraries or to intimidate comics retailers. “Just because law enforcement doesn’t understand a comic doesn’t mean it’s illegal,” Brownstein said.

Reid goes on to highlight the work of “three full-timers employees and several part-timers” has gone from simply providing legal representation to taking preventive measures:

While CBLDF is best known for quickly providing lawyers or legal advice to anyone under legal threat over access to comics, during the past year CBLDF, in conjunction with the Association of American Publishers, the American Booksellers Foundation for Free Expression, and the National Coalition Against Censorship, has been working to set up “preventative programs.” It has also been releasing publications designed to provide tools to protect First Amendment rights. One initiative is the Kids Right to Read program, which has released Raising a Reader: How Comics & Graphics Novels Can Help Your Kids Love to Read, a publication for parents and teachers, produced by educational specialist Meryl Jaffe and Jennifer L. Holm, co-creator of the Eisner Award–winning Baby Mouse graphic novels. CBLDF has more than 25,000 copies of the pamphlet in print.

You can read the entirety of Reid’s article here. When asked bout fundraising in 2013, Brownstein tells Reid, “We’re not treading water, we’re swimming, but it’s choppy waters. We work hard to help protect the First Amendment rights of real people, and those same individuals provide the funds that help us make a difference.” The year isn’t over, so please help support CBLDF’s important First Amendment work by making a donation or becoming a member of the CBLDF!