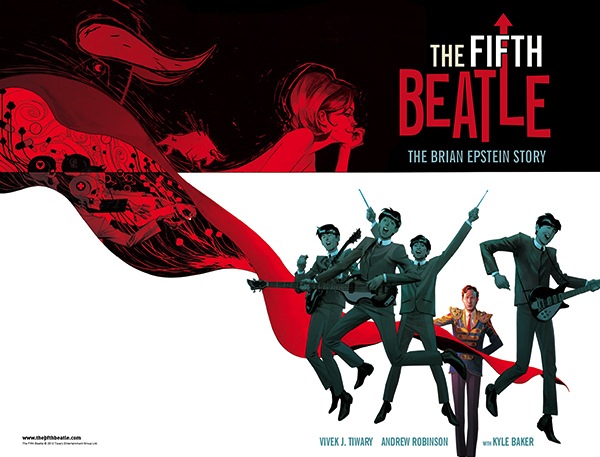 This week marks the release of The Fifth Beatle, a 10-year passion project for author and theatrical producer Vivek Tiwary. This book brings to light the untold true story of visionary manager Brian Epstein, a man who guided the Beatles into international superstardom but struggled his entire life with his own self-expression as he was forced to hide his homosexuality from his family and his peers.

Mr. Tiwary, a long-time supporter of CBLDF, wanted to use the release of The Fifth Beatle as an opportunity to help raise money and awareness for the right to read. To that end, he has offered to take part in our “Spirit of Giving” holiday campaign, during which he will personalize copies of The Fifth Beatle as part of an online “virtual signing.”

Tiwary has also donated for auction what is likely the most deluxe possible edition of The Fifth Beatle. This Ultimate Deluxe Edition consists of a hardcover of the groundbreaking graphic novel, and features a wraparound, textured cover and a section of bonus materials, such as Beatles and Brian Epstein memorabilia, artist sketches, and alternate covers, all in a special slipcase. The deluxe edition also includes material created for the release of The Fifth Beatle, including a 10 x 14 inch full color print, and a promotional ashcan that was created to preview the project in its earliest stages, and a script page signed by the author.

Finally, making Ultimate Deluxe Edition truly singular, the book will come PERSONALIZED by Mr. Tiwary, and artist Andrew Robinson will sketch BY REQUEST in the frontispiece of this limited print-run hardcover. The author and artist have put together this amazing package to celebrate the importance of Free Expression, a cause that was close to the heart of Mr. Epstein. You can bid on this awesome item here.

When discussing this fundraiser with CBLDF, Mr. Tiwary explained that “Brian Epstein believed that, if done correctly, Pop Music could be elevated to an art form. He believed that the Beatles were songwriters who deserved to be uttered in the same breath as Beethoven and Mozart; they were as worthy as artists as classical composers. worthy as artists as classical composers. And I think that’s not far off from saying that these people need to be allowed to express themselves fully. Brian fought with the traditional music industry to allow the Beatles to say what they wanted to say, however they wanted to say it– whether it was through music, album covers and artwork, or sharing political opinions”

In speaking on the subject of Epstein’s support of the Beatles’ creativity, Mr. Tiwary related that “…the Sgt. Pepper’s album cover, EMI did not want to put out. They said, ‘It’s crazy, all of these peopole’s images, we can’t do this. We need to get permissions from all of the estates and all the living people depicted.’ So, Brian said, ‘Fine.’ And he did. He got the permissions from the individuals of the estates of every single person whose likeness is featured on Sgt. Pepper’s, because he thought it was worth it. The EMI executives thought he was crazy, asking, ‘Why would you go through all of this effort for an album cover?’ But Brian believed that the album cover for Sgt. Pepper’s was an artistic statement that was worth putting the effort into, and that would stand the test of time.”

Mr. Tiwary considers Epstein a personal hero and discovered Epstein’s story when he was in business school. “I tend to be a bit academic, and I was searching for business inspiration. I thought if I’m going to work in entertainment, I ought to study the great entertainment visionaries. Twenty-one years ago there was no Wikipedia, there was no YouTube, so I was kind of dumbfounded as to how little information there was about him, which sort of added to the mystery for me. I eventually uncovered this wonderful Beatles business story: How Brian created the famous suits and haircuts, and got them a record deal when no one wanted to sign them, how he convinced Ed Sullivan to book them when a UK band had never made an impact in the United States. It’s a wonderful business story, and it’s all in the book. However, it’s the human side of his story, the fact that Epstein was gay and Jewish and from Liverpool, when it was a felony to be gay, there was a lot of anti-Semitism in the UK, and Liverpool was not a town that had any sort of cultural influence. So, he was in many ways the ultimate outsider. This gay, Jewish man running Liverpool saying, ‘I found a local band and they’re going to be bigger than Elvis!” It was laughable! But he really believed that these guys were going to elevate Pop Music to an art form, that they should be allowed to express themselves through whatever way they could — through their music, through their fashion, through whatever media their art would take them — and that as a result of that the world was going to get a great message of love! I know that sounds awfully cheesy, but that’s what the band was about, and Brian saw that in them and he chased that dream. Spectacularly. He gave the world the message of the Beatles, and that to me is an inspiring story.”

“Brian Epstein’s story has taught me that no matter what kind of opposition you face, it’s worth chasing your dreams, and it’s worth fighting for artistic expression.”