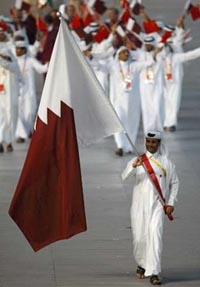 Halfway across the world, in a tiny country on the Arabian Peninsula, cartoonists are in high demand. In Qatar, which is slightly smaller in size than the state of Connecticut, editorial cartoonists are a vital part of journalism in the area — often to the frustration of local officials.

Qatari caricature artists enjoy a relatively large amount of press freedoms, which have allowed the culture of pictorial politics to flourish, according to an article in The Peninsula, an English-language Qatari news source:

“Among the many factors that contributed to the flourishing of caricature in Qatar was the era of freedom of speech and expression in which we have lived since the nineties, when Father Emir H H Sheikh Hamad bin Khalifa Al Thani took over. He was even called ‘the freedom of expression prince,’” [artist] Salman Al Malek said.

Many of the cartoonists are locals who “carry the same spirit and soul of their community.” Because much of their other media is done by non-Qatari, the editorial cartoons are often a big hit, and some consider them the “star of the paper, read by all.”

Some believe that Qatari cartoonists already have enough freedom — but others believe cartoons are beginning to fall too much in-step with the non-controversial topics of the newspaper. While the government isn’t imposing restrictions on cartoonists in Qatar, some are critical that the press are imposing their own restrictions on freedom of expression:

“What I’d like to point out here is that regrettably, the Qatari press cannot function within the present levels and parameters of freedom. The press magnates are far more governmental and authoritarian than the government itself,” [artist Ghanem Al Sulaiti] added.

Previously, the censors who monitored newspaper content would face legal repercussions if an inappropriate cartoon got printed. Now, cartoonists and editors of the paper itself will face consequences if their material steps out of bounds, according to Malek:

Last November, a meeting was held in Doha (the capital of Qatar) among multiple political cartoon organizations to plan ways to protect cartoonists who get in trouble because of their work. The meeting was hosted by the Doha Centre for Media Freedom and attended by organizations including Cartoon Movement and the Cartoonists Rights Network International. They plan to “create a network tentatively call[ed] ‘Cartoonists in Distress,’ that uses the strengths of each organization to create an effective support structure.”

Becca Hoekstra is a recent graduate working part-time at a community funded-radio station. Luckily, this gives her plenty of time to read, but isn’t helping her pay off any student loans.