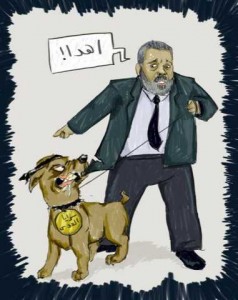 A Palestinian cartoonist who shared a drawing critical of militant group Al-Quds Brigades on her Facebook page has apologized and deleted the post after receiving death threats and harassment from supporters of the organization.

Last week, in response to recent rocket attacks on Israel that are thought to have been launched by Al-Quds, cartoonist Majda Shaheen drew Palestinian Prime Minister Ismail Haniyah of ruling party Hamas struggling to control a snarling attack dog representing Al-Quds. Members of Al-Quds and its parent organization, Palestinian Islamic Jihad, apparently objected not only to the suggestion that they need to be reined in, but also to being depicted as a dog, an animal considered unclean by fundamentalist Muslims and some moderates. Threats, images of violence, and Photoshop manipulations of Shaheen’s cartoon soon proliferated on her Facebook fan page. The next day, she deleted the cartoon and posted a half-hearted apology, as translated by the Jerusalem Post:

I wish to apologize for the cartoon I published about Hamas and the Al-Quds Battalions. My intention was to relay a message in a clear and firm manner. But there are many who prefer to deal with the issue in an artificial manner instead of making an attempt to understand the idea behind it.

The statement did not seem to soothe many tempers, as critics continued to call her a traitor, a prostitute, and a “Zionist agent.” (Not likely: Considering the “Free Gaza” cover photo on her personal Facebook page, Shaheen appears to support Palestinian statehood but simply disagrees with Al-Quds as to the best method of attaining it.)

To compound matters, other women who have similar names were misidentified as Shaheen. An Al-Quds Facebook page stamped the word “execution” on a picture of an Egyptian doctor, while a group that stokes anti-Islamic sentiment in the U.S. used a photo of a retired teacher named Majedah Shaheen for its story about the controversy. Neither of these turned out to be Shaheen the cartoonist, and Arab Cartoon House reports that Al-Quds has now posted on Facebook “a request for help to identify [her] real character and place of residence.” Obviously this does not have positive implications for her continued safety. As Arab Cartoon House points out, ruling authority Hamas bears responsibility for the security of all its citizens and should take whatever steps necessary to ensure that Shaheen is not harmed.