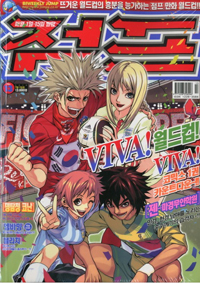 For a time in the 1980s and ‘90s, South Korean manwha enjoyed the same success as their Japanese manga neighbors. Sadly, though, while manga continued to grow and make inroads internationally, print manwha were decimated at home amidst a panic strongly reminiscent of the 1950s backlash against comics in the U.S. In a recent article from the Korea Times, Baek Byung-yeul examines how misguided–and now repealed–government policies of the 1990s continue to stymie the manwha industry to this day.

Just as the vibrant pre-1954 American comics industry was largely cut down by the Comics Code Authority, manwha in the mid-’90s fell to media sensationalism and government regulation. Says Baek:

[T]he market for Korean comics never really recovered from the overweening government suppression during the 1990s when cartoons were demonized as harmful influences to young people, displaying paternalism at its worst.

School children were discouraged from buying comic books, punished for simply carrying them in their bags. A slew of publishers suffered and fell, killing the creative vibrancy of the scene and affecting a wider generation of readers who moved on to other cultural mediums.

Many Korean parents did not approve of their children wasting precious study time on manwha. Kim Hyung-Sik, an office worker who has embraced manwha collecting as an adult, recalls that his parents “went ballistic” any time they caught him reading the books when he was young. Their disapproval even extended to physical abuse, he reports: “They ripped my books. They would hit and spank me and I would go to school with my legs bruised. This was an experience I shared with many of my classmates.”

Just like in the U.S. in the 1950s, mass burnings of manwha were held regularly; but unlike their American precursors which were organized by parochial schools or civic organizations, the Korean book bonfires were government-sanctioned:

[S]chools used to pick a day in May to gather the many comic books impounded from students and burn them in the schoolyard, one of the strangest rituals honoring the month designated by the state as “month of the family.”

The book burnings, which were encouraged by government officials, continued until the late 1990s. The biggest of these ceremonies was held every year in front of the Seoul City Hall, where municipal authorities invited the national media to record the spectacle of thousands of comic books going up in flames.

In 1997, the South Korean Ministry of Culture labeled manwha “harmful substances” on a par with alcohol and cigarettes. This designation barred business owners from selling the books to minors and irrevocably devastated print manwha. One difference from the 1950s, however, is that the Internet was waiting to take up the slack. Today many Koreans avidly follow their favorite “webtoons,” but Baek points out that this development is not as much of a godsend as it may seem. Since readers expect to access webtoons free of charge, creators are beholden to the websites that host them–and which regard them as just another bit of content to raise pageviews and impress advertisers. Many webtoon creators are poorly paid and desperate for exposure; unless a more sustainable business model is found, Korean comics still could die out altogether.