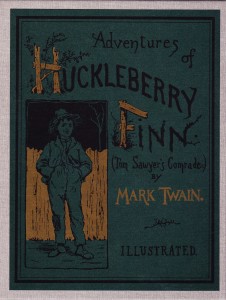 Since its first American publication on February 18, 1885, Mark Twain’s The Adventures of Huckleberry Finn has been the subject of praise and controversy. Following the adventures of Tom Sawyer’s lively comrade Huck Finn, the novel is among the first to be written in vernacular English common to the Antebellum South, language that contributed to its long history of being challenged, censored and banned from classrooms and libraries. In fact, Huck Finn remains one of the most banned books of all time, having been considered  “too vulgar,” “racist,” and “socially offensive.”

In many ways, Mark Twain was a man ahead of the times, understanding that the critical reception of his book would only draw more attention. After the Concord Massachusetts Public Library committee excluded Huck Finn from their selections in 1885, Twain told his editor:

“Apparently, the Concord library has condemned Huck as ‘trash and only suitable for the slums.’ This will sell us another twenty-five thousand copies for sure!”

To celebrate the anniversary of the novel’s enduring battle against censorship, CBLDF collected the following quotes and facts from the colorful, vibrant 129-year history of Huck Finn: