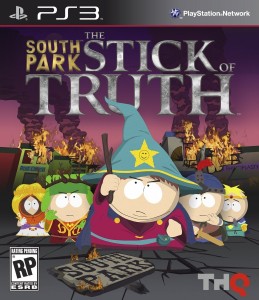 The the oft-delayed and highly anticipated role-playing video game South Park: The Stick of Truth is finally hitting the shelves next week. However, a leaked reviewer’s guide for European journalists has revealed that the version of the game that publisher Ubisoft will release on March 5 for consoles in Europe, the Middle East, and Africa will be noticeably different from the version out in North America the day before.

The document sites seven scenes of about 20 seconds each that will be excised from the game for European audiences:

These changes will be made to the console releases of the game and not, apparently, the PC version.

According to the document, the decision to alter the game was made by Ubisoft EMEA. A spokesman for Ubisoft told eurogamer.net that the changes were “a market decision.” The game had already been approved with an 18+ rating by the PEGI (the Pan-European game ratings board), and these changes will not effect its standing there. It is possible that Ubisoft hoped to head off controversy in countries with strongly Catholic cultures, such as Spain and Italy.

Ubisoft is a private company and can make whatever marketing decisions it wants, but some are concerned about changes to artistic expression for the sake of appeasing the potentially offended. However, in this case the manner in which the changes are being carried out shines a light on the absurdity of censorship in a snarky way that perfectly befits the South Park name: Instead of removing the content entirely, a placeholder image will be displayed alongside text from series creators Trey Parker and Matt Stone describing what the player is missing.

Similar changes were made to the Australian version of the game in order to get past that country’s notoriously restrictive ratings board. FOr the Australian release, instead of the offending alien abduction scenes, players are treated to an image of a crying koala with the word “CENSORED” superimposed over it while text narrates “aliens forcibly probe your rectum with a dildo-shaped probe.”

If you’ve gotta be censored, you might as well do it with style.

← True Tales of Censorship: Craig Fisher and His Stay in The House of Spirits
Using Graphic Novels in Education: King →