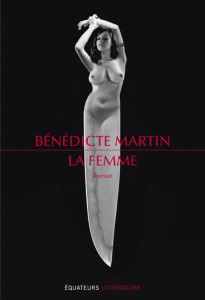 Apple’s notoriously inconsistent digital publishing policy has been applied to yet another title, this time targeting Bénédicte Martin’s novel La Femme due to its “inappropriate” cover. Apple has established a troubling history of restricting books from their iOS marketplace, with last year’s Sex Criminals being a prime example of their inability to take images in the context of a story. In the case of La Femme, Apple has taken issue with the cover of the book, which features a topless woman.

The French publishing house, Les Editions des Equateurs, isn’t taking Apple’s decision quietly. Frébourg Olivier, Publishing Director, stated that the ban was “a clear act of censorship” and “an affront to creative freedom.” He explained that Apple was not censoring Martin’s book based on any objectionable content — the book itself is a “literary and poetic story about feminism” — instead only focusing on the artistic nude cover, which Olivier refused to modify.

Olivier has demanded that Aurélie Fillippetti, France’s Minister of Culture, advocates for their freedom of expression, but unfortunately we’ve seen where appealing to Apple’s common sense about their murky policy leads. As a private company, they have the right to refuse to carry content, but it’s unlikely that they will ever modify their vague and unevenly enforced policy, even if it does continue to alienate readers and publishers.