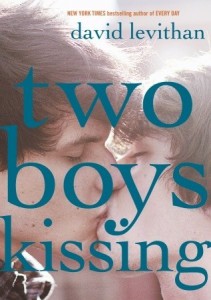 This week, CBLDF joined a coalition led by CBLDF-sponsored Kids’ Right to Read project to defend David Levithan’s Two Boys Kissing, which was challenged in the Fauquier High School library in Warrenton, Virginia. CBLDF joins coalition efforts like the one to protect the freedom to read comics. Censorship manifests in many ways, and the unique visual nature of comics makes them more prone to censorship than other types of books. Taking an active stand against all instances of censorship curbs precedent that could adversely affect the rights upon which comics readers depend.

Parent Jessica Wilson launched a campaign against because she judged the book by its cover, which features, well, two boys kissing. Wilson used the school’s own policy against public displays of affection to demand the book’s removal. From Fauquier High School’s student newspaper, The Falcon:

“My first thought was that I was shocked,” Wilson said. “My second thought was, ‘who purchased this book for the library and why?’ My issue is with the teenage celebration of sexuality throughout the book. At my home, we can talk about what [my children] are going to watch or read, but this book just kind of felt snuck in the library. It also made me wonder, budgetary-wise, if the school is spending money for the proper resources. I cannot imagine that there wasn’t another, more appropriate book that could have been purchased that would’ve appealed to a wider audience.”

Two Boys Kissing centers on Harry and Craig, two 17-year-olds who are attempting to set the Guinness World Record for longest kiss in response to the brutal beating of one of their gay friends. The book candidly and honestly shares the experiences of several gay teenagers and was inspired by true events. The book was longlisted for the National Book Award and has received overwhelmingly positive reviews from several outlets, including School Library Journal, Booklist, Publishers Weekly and the Wall Street Journal.

An internal review committee met in February, and the majority decided that the book was appropriate and should be retained in the library. Wilson appealed, and a second committee convened on Wednesday to decide the book’s fate. During this meeting, several people in the community shared their opinions and several letters were read aloud, including a letter from the author. Some expressed the opinion that the book was obscene, while others defended the book, citing its positive influence on LGBT teens. The review committee voted unanimously to keep the book on library shelves.

Wilson can appeal the decision to the school board, but it is unknown yet if she will do so.