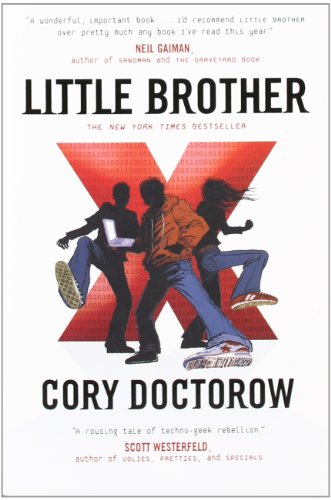 In a letter sent today (below), members of the National Coalition Against Censorship’s Kids’ Right to Read Project expressed concerns over the cancellation of Cory Doctorow’s novel Little Brother, as the assigned text for Booker T. Washington High School’s school-wide summer reading program.

The letter points out that “the book was selected after an extensive process by the professional staff”, yet the program was cancelled despite “no formal challenge to the book and thus no reconsideration by a review committee to address the merits of the book or respond to any objections to it.”

“School officials are bound by constitutional considerations, including a duty not to give in to pressure to suppress unpopular or controversial ideas,” said NCAC Executive Director Joan Bertin. “Removing a book because it contains ideas that some members of the community may object to, or disapprove of, violates basic constitutional principles.”

Doctorow brought widespread attention to the incident on Friday through his blog on BoingBoing.net, commenting that the principal’s correspondence regarding the decision “cited reviews that emphasized the book’s positive view of questioning authority, lauding ‘hacker culture’, and discussing sex and sexuality in passing.”

Regarding today’s letter and the importance of defending kids’ right to read, Doctorow said:

I’m sure the principal—like all career educators of my experience—is a man of goodwill who wants to do what’s best for the kids in his care. Doing this does not make him a bully or a bad person—but it does make him wrong. Because the right way to address controversial topics in society and literature is discourse— there is an educational opportunity here, for the taking. I’m glad to have the chance to make the most of that opportunity, even if the school administration won’t support its faculty’s choice and give all the kids in the school the chance to read and discuss my book.

The Kids’ Right to Read Project (KRRP) is a National Coalition Against Censorship signature project that is supported by the American Booksellers Foundation for Free Expression, the Association of American Publishers and the Comic Book Legal Defense Fund. They were joined on the letter by the National Council of Teachers of English, The PEN American Center Children’s and Young Adult Book Committee and the Society of Children’s Book Writers & Illustrators.

The letter explains Supreme Court rulings that outline the First Amendment implications of privileging “the political, moral, and religious beliefs of some individuals, who might object to the books content, over others, who would not.”

“Cory Doctorow’s work as an author and activist engages with the realities today’s young people are confronting on a daily basis as citizens in their own right,” says Comic Book Legal Defense Fund Executive Director Charles Brownstein.  “We hope the concerns expressed by all of us at the Kids Right to Read Project will lead school officials to honor the rights of their students by reinstating this valuable book.”

The letter closes by urging the school to reinstate Little Brother as the school-wide summer reading assignment.

← Pensacola Principal Cancels Little Brother Summer Reading Program
This Week Only: Donate $5 Extra to CBLDF When You Shop on Amazon! →