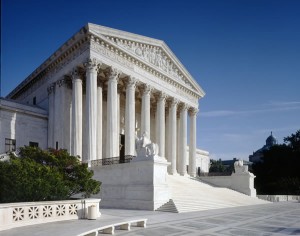 On Monday, the Supreme Court, in a unanimous 9-0 ruling for Susan B. Anthony List v. Driehaus, upheld the right of people and organizations to preemptively challenge a law that infringes on First Amendment rights. The decision represents a key victory for free speech.

The central issue of the case was the right to bring “pre-enforcement” challenges to potentially unconstitutional laws. In fear of criminal or civil prosecution under such laws, people may be less likely to exercise their First Amendment rights. A pre-enforcement challenge is brought before or soon after a law goes into effect, prior to actual enforcement of the law. These challenges can alleviate the chilling effect on free speech by helping determine the law’s constitutionality and, if necessary, providing a preliminary injunction that suspends the law while the case is being litigated.

The legal challenge began when a U.S. District Court in Ohio dismissed a challenge by Susan B. Anthony List (SBAL) to a state law that regulated speech in campaign advertising. At issue was a series of political attack ads that SBAL intended to place on billboards but were denied the right to do so because the politician at whom the ads were targeted threatened to sue the billboard company if it ran the ads. SBAL filed a pre-enforcement challenge to the law, arguing that the threat of litigation impeded their First Amendment right to free speech. The U.S. District Court determined that SBAL lacked standing to file the pre-enforcement challenge because it couldn’t demonstrate that prosecution was likely or imminent. The decision was upheld by the United States Court of Appeals for the Sixth Circuit, and SBAL appealed to the Supreme Court.

In March, CBLDF and Dark Horse Comics joined a Media Coalition-led group of free speech advocates, media organizations, booksellers, librarians, and publishers to submit an amicus brief (friend-of-the-court brief) in the case. Laws such as the one SBAL opposed would mean a choice between self-censorship or the risk of criminal prosecution, an untenable circumstance for many publishers, booksellers, librarians, and media organizations. The brief asked the Supreme Court to adhere to the standard set in 1988 in Virginia v. American Booksellers Association, a milestone case brought by members of Media Coalition.

“This decision affirms the principle that a person, organization or business should not have to risk prosecution to challenge the constitutionality of a law,” said David Horowitz, executive director of Media Coalition, which submitted a brief in the case. “We are gratified that the Court today recognized the immense harm that can occur when individuals are required to put their liberty at risk in order to vindicate their free speech rights.”

Essentially, the Supreme Court decision affirms the essential right of the Media Coalition and organizations such as CBLDF to protect the First Amendment by challenging unconstitutional laws before they can impact free speech. We applaud the Supreme Court for their unanimous decision in this key victory for free speech!

← Join Us For a Google+ Hangout Featuring Cory Doctorow and More!
CNN Spectacularly Fails To Understand Manga and Anime →