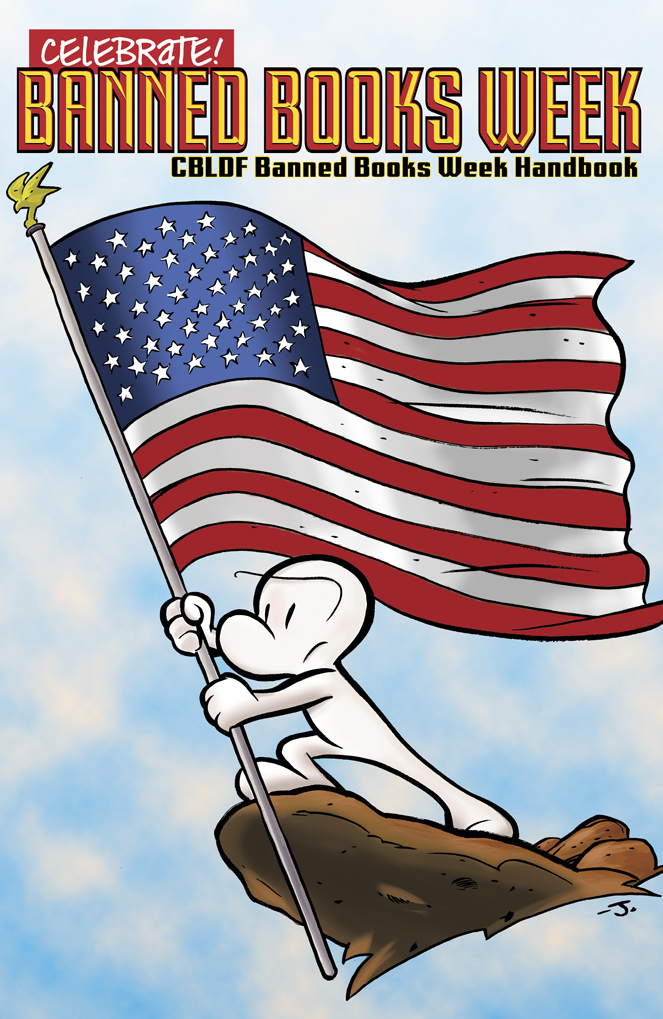 It’s Independence Day. In the midst of cookouts and fireworks, it’s a good time to reflect on the liberties we have — and often take for granted — including the right to free speech and the freedom to read anything we want. Unfortunately, some people try to impinge on these rights, which is why CBLDF exists. It’s also a reason we celebrate Banned Books Week every year — each September, we celebrate the books that have been challenged and sometimes banned by those who would forget the freedoms that the First Amendment guarantees.

In remembering the freedoms we have, now’s as good a time as any to begin planning for Banned Books Week, and CBLDF is delighted to provide some tools to help you coordinate banned books displays, events, and more!

Last weekend, CBLDF attended the American Library Association’s Annual Conference in Las Vegas, where we moved lots of (free!) copies of our brand-new Banned Books Week Handbook and discussion guides for banned and challenged comics. But that was just the beginning: With this year’s Banned Books Week focusing on comics and graphic novels, we have much more in store for librarians, educators, and retailers who want to build displays and events around the theme!

Library Journal’s Ian Chant talked to CBLDF Executive Director Charles Brownstein about recent high-profile challenges to comics, such as last year’s restriction of Persepolis in Chicago Public Schools and this year’s effort by some South Carolina legislators to enact punitive budget cuts against the College of Charleston for choosing Fun Home as a summer reading book. Graphic novels like these are prime targets of censors for a few different reasons, Brownstein said: First because the comic format is still undervalued by the general public, and second because “the graphic nature of the medium also mean it depends on static images that are easy to take out of context.”

Alongside the many teachers and librarians who have already caught on to the value of comics for illustrating both literary and artistic concepts, engaging reluctant readers, and appealing to visual learners, CBLDF aims to eradicate this impression that comics are not “real books” deserving of First Amendment protections. To that end, we provide not only the new discussion guides for book groups and classroom discussion, but also Meryl Jaffe’s regular in-depth series Using Graphic Novels in Education. For parents and educators who want information about the learning benefits of comics in general, we also offer the publication Raising a Reader! How Comics & Graphic Novels Can Help Your Kids Love To Read!

As Brownstein pointed out, manga comes with its own special issues for libraries. For instance, patrons unfamiliar with the format sometimes assume that any book with pictures is appropriate for their children and are in for a bit of a shock when they discover that’s not the case. To aid librarians in developing manga collections and dealing with challenges, we last year teamed with Dark Horse Comics and an impressive array of manga experts to produce CBLDF Presents Manga: Introduction, Challenges, and Best Practices.

We’ll be adding resources throughout the summer. With these resources, as well as our ongoing coverage of current censorship issues here on the site, we hope to help librarians, educators, and retailers make this the best Banned Books Week yet! As we raise awareness about censorship — and you help us do so — we hope that more people will recognize and fight for the right to read. Happy Independence Day, indeed!