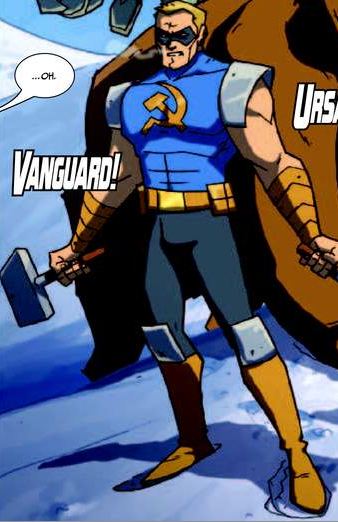 A Russian government media regulator is investigating an upcoming Avengers comic as “propaganda of a cult of violence,” possibly resulting in an official warning to Swedish publisher Egmont which distributes the books in Russia. The government is particularly concerned about the character Vanguard, who bears a Soviet hammer and sickle on his chest, and his fighting companions the Winter Guard.

Another government office, Rospechat or the Federal Agency for Press and Mass Media, requested that the state media watchdog Roskomnadzor “review…the children’s magazine The Avengers” for “the use of Soviet symbols, the presentation of the characters as Russian service personnel, and the incitement of violence and cruelty.”

Since publishers are only allowed two warnings per year before their license is revoked and they are barred from doing business in Russia at all, the Moscow Times reports that Egmont is leaning towards editing out the Soviet symbols and the mention that the Winter Guard are “servants of the Russian Federation” before releasing the comic as scheduled in August.

← San Diego Public Library and CBLDF Warm up for SDCC with a Discussion of Banned Comics
SDCC 2014: CBLDF Signing and Panel Schedule! →