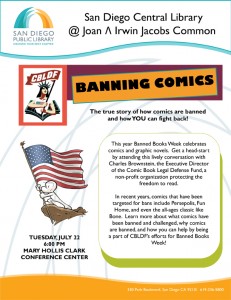 CBLDF Executive Director Charles Brownstein will be warming up for an action-packed Comic-Con International by presenting “Banned Comics! The True Story of How Comics Are Banned & How You Can Fight Back!” with the San Diego Public Library on July 22 at 6:00 p.m.

The talk will take place in the Mary Hollis Clark Conference Center in the San Deigo Central Library, which is located at 330 Park Boulevard, on the far side of Petco Park. If you’re in San Diego early for Comic-Con, the library is a convenient walk or cab trip away from most of the hotels near the convention center. Brownstein will be speaking about CBLDF’s work on behalf of comics and the right to read and our plans for Banned Books Week 2014:

Every year comics are banned in libraries; learn how you can fight back! This year Banned Books Week celebrates comics and graphic novels.  Get a head-start by attending this lively presentation by Charles Brownstein, the Executive Director of the Comic Book Legal Defense Fund, a non-profit organization protecting the freedom to read.

In recent years, comics that have been targeted for bans include Persepolis, Fun Home, and even the all-ages classic like Bone.  Learn more about what comics have been banned and challenged, why comics are banned, and how you can help by being a part of CBLDF’s efforts for Banned Books Week!

Warm up for Comic-Con International and get some tips for celebrating Banned Books Week by joining CBLDF and the San Diego Library for a discussion of banned comics on Tuesday, July 22!