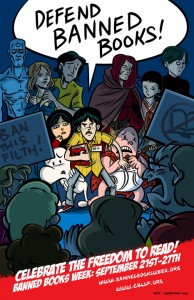 BANNED BOOKS WEEK: No ‘Bone’ or ‘Neverwhere’? Here’s why we can’t afford to shelve the debate: Michael Cavna examines the challenges to Bone and Neil Gaiman’s Neverwhere in an in-depth article for The Washington Post.

Banning Bone: Inspiration and Book Banning Do Not Go Together: Jeff Smith got Banned Books Week off to a roaring start as he pulled no punches in the blog he wrote for Reading Rainbow.

Comics on the Most Banned List?: Bone creator Jeff Smith writes about the inclusion of his bestselling series on ALA’s most challenged comics list and the right to read at Huffington Post.

Be a Hero: Jenni Holm, multiple Newbery winner and the writer of the popular series Babymouse and Squish, advocated for letting kids have the freedom to choose their own books at the Reading Rainbow blog.

The Comic Book Legal Defense Fund Tells a Tale of Censorship: CBLDF Executive Director Charles Brownstein talks to Nick A. Zaino III about the challenges that put Bone on ALA’s list. Read all about it at Kirkus.

Banned Books Week and the “Dangers” of the Comic Book: Casey Gilly examines the history of comics censorship from the Wertham era to contemporary attacks on comics for CBR.

In Defense of Banned Comics: 10 of Our Favorite Challenged Works: Paste Magazine manages to whittle our 22 Banned and Challenged Comics list down to their 10 favorite titles.

Cover up: 10 essential banned and challenged graphic novels: Entertainment Weekly also identifies 10 essential comics, but their favorite books are not the same as Paste‘s! Check out the list here.