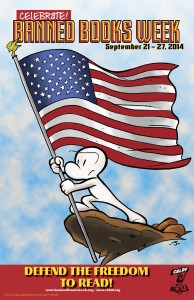 Banned Books Week has been running for the past 32 years, but this year is the first time it takes special focus on comics and graphic novels. Jeff Smith, CBLDF board member and author of the award-winning — and frequently challenged — series Bone, took time last week to talk to Alison Flood at The Guardian about Banned Books Week and how its focus on comics is a big deal.

According to the ALA, the most challenged book of 2013 was a children’s graphic novel, Dav Pilkey’s Captain Underpants, which was targeted for “offensive language, being unsuited for the age group and violence.” The 2013 list was bookended by comic books — Smith’s Bone rounded out the top 10 for its “political viewpoint, racism and violence.” Smith tells Flood:

“I’ll be honest, I had two simultaneous reactions when I heard Bone was in the top 10. First, that I was being attacked and I didn’t know why. Then a thought like: hey, this isn’t the worst thing that can happen. A lot of my heroes are on this list. Mark Twain, Melville, Bradbury, Steinbeck, Vonnegut; authors whose work is about something — that do the kind of writing I aspire to.”

Smith acknowledged the important role that comics now play in society and how those who challenge books aren’t necessarily bad people:

“Comics are now part of the literary scene, part of the discussion, and it shines a spotlight on these kinds of attacks,” he said. “That doesn’t mean the people who want to ban these books are malicious; in fact just the opposite. They have a concern which to them is legitimate. But that isn’t the point. The point is that they are trying to take away someone else’s ability to choose what they want to read, and you can’t do that.”

Comic books have quite the history of censorship, from the self-imposed censorship that resulted from the establishment of the Comics Code Authority in 1954 to today, which may now be Code-less but comics are common targets nonetheless. The American Library Association seeing more than 18,000 attempts to remove books from both schools and libraries since 1990, and the attacks on comics are only continuing to rise. CBLDF’s executive director, Charles Brownstein, explains that comics are an easy target:

“Comics are one of the most commonly attacked kinds of books. They’re uniquely vulnerable to challenges because of the medium’s visual nature and because comics still carry a stigma of being low-value speech. Some challenges are brought against comics because a single page or panel can be taken out of context, while others come under attack because of the mistaken notion that all comics are for children,” said Brownstein.

When it comes to challenges, the work as a whole must be considered. Unfortunately, some people have a hard time doing this when it comes to comic books. Essentially, the way that comics use art in combination with text makes “problematic” excerpts much easier to extract as opposed to digging through and nitpicking sentences or paragraphs from novels.

This week, libraries, schools, and retailers all over the country will be holding Banned Books Week events to raise awareness and celebrate the freedom to read. We have compiled our own list of some of the  comics-related events — including our own — taking place throughout the country here. You can find more information about Banned Books Week by visiting the official website or by downloading the CBLDF Banned Books Week Handbook.

To read the entirety of Flood’s conversation with Smith, visit The Guardian website.

← 22 Banned and Challenged Comics
TODAY: Copyright Versus Creativity! Tales from the Comic Book Crack Down! →