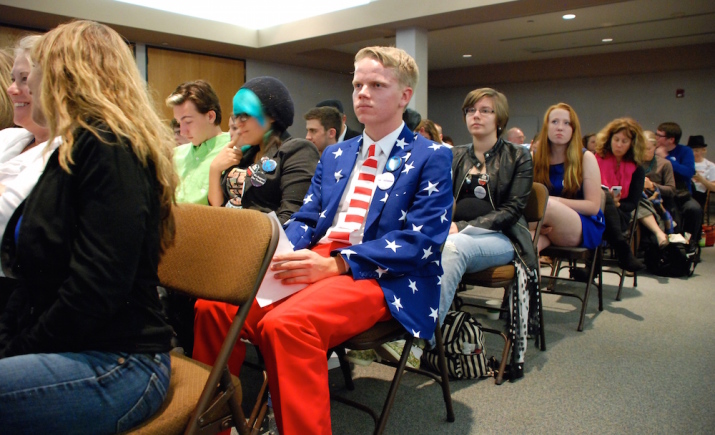 Students wait to speak at the board meeting

In Jefferson County, Colorado, where the debate continues over a plan to review the AP U.S. History curriculum, about a dozen students were ejected from a school board meeting last week for civil disobedience tactics including reading passages from their textbook out loud.

The irony, of course, is that members of the school board who originally proposed the curriculum review wanted to de-emphasize “civil disorder, social strife or disregard of the law” in the teaching of American history. This would be quite a feat, considering all of the key events from the American Revolution through the Civil Rights movement and beyond that were precipitated or aided by at least one of the above.

At last Wednesday’s meeting one student was allowed to read a textbook passage about Malcolm X, but the microphone was cut off as soon as he reached his allotted time. The Denver CBS affiliate describes the events that led to the students’ removal:

After someone blew a whistle, about a dozen students stood and recited the Pledge of Allegiance. They then gathered in the hallway outside the meeting and chanted “We are the future, let us know our past” before squeezing into an elevator and leaving.

After the students left the building and gathered on the lawn, according to the blog JeffCo School Board Watch and student leader Ashlyn Maher, they were soaked by sprinklers that mysteriously came on around 8 p.m. on a chilly evening. When they managed to find space between sprinklers to continue their discussion, a security officer emerged and told them to leave because they were trespassing.

Since Maher never got to read the statement she had prepared at the board meeting, she recorded it at home that evening and uploaded it to YouTube:

Once again, kudos to all the Jefferson County students, teachers, and parents who are standing up for academic freedom!

← Challenge to Jodi Picoult Book Struck Down in Pennsylvania
A Full-Frontal Assault on Censorship: Zap Comix and the Underground Movement →