Are you one of the many who will be nestling into their couch for a thirteen hour stretch come April 10? Netflix’s new series Daredevil is set to premiere soon, and the internet is already buzzing with fan theories and suspicions. Whether you plan to savor the series and watch it episodically or binge in a single sitting, it may be hard to avoid joining in on the conversation. If you’re looking for answers to burning questions, the devil will be in the details. 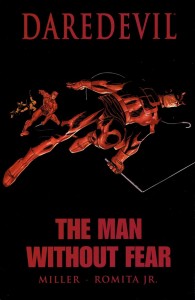 We’ve got signed bookplate editions of Frank Miller’s Daredevil: The Man Without Fear available on our Rewards Zone. We know the series was filmed like a 13-hour origin movie, and the trailers have already teased several key scenes from the book. From costume design to character choices, parallels continue to be drawn from the famed Miller work, which only further begs the question, “What else will they tie in?” Tie in. That choice of words wasn’t an accident. Daredevil will be tying in with the other set-to-be-released Netflix series and the Marvel Cinematic Universe. Watching for hidden details now could mean hints for future Defenders series.

But comic books aren’t all about research and theories; mostly they’re just plain old fun. It’s fun to get invested in a character and his or her development, watch the story progress, follow the action. But what happens when the fun suddenly stops? The shock that comes with a series ending after a serious binge-watch session is one that’s wide felt among viewers. To help ease your adjustment to life without a series in which you’ve just deposited a large emotional investment, we’ve found some original Daredevils titles signed by Frank Miller on the front cover. Available on our eBay page is the first issue of an 11-issue Marvel UK anthology (from before all UK titles merged to form Mighty World of Marvel) featuring none other than the man without fear himself! The issue not only reprints of Frank Miller’s Daredevil, but Captain Britain and Spider-man as well! Mixed in with the stories are articles and reviews by Alan Moore, and full color pin up poster inserts. Also up for auction is the Mark Waid’s Daredevil Volume 1 Hardcover. This copy comes signed and sketched by series artist Paolo Rivera on a bookplate located on the inside front cover and is the last in stock. (Don’t fret! We still have copies of the hardcover signed by writer Mark Waid available in our Rewards Zone.)

The traditional method of watching TV is still an option with more great comic series are being added to the lineup by the minute. Another recent addition is the new iZombie series. The opening credits to the series offer a taste of the amazing artwork Michael Allred spreads over 28 issues. CBLDF can get you started with the iZombie Vol 1 Trade Paperback signed by Chris Roberson so you can follow along, compare, and contrast if binge-reading isn’t your pace.

Whether a show is an instant hit with millions of watchers and a spin-off series, or doesn’t make it past the pilot, the CBLDF always offers signed and exclusive merchandise to expand your ever-growing fandom.