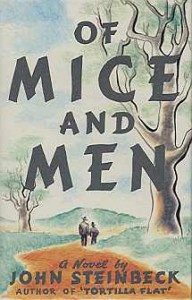 CBLDF has joined the National Coalition Against Censorship’s Kids’ Right to Read Project and other free speech advocates to protest an Idaho school district review committee’s recommendation that John Steinbeck’s Of Mice and Men be restricted in the 9th grade curriculum. Some parents and review committee members claim that the 1937 novella about migrant workers during the Great Depression contains too much profanity and is “too dark.”

The Coeur d’Alene school district’s curriculum review committee is in the process of judging the suitability of about 50 books that teachers can choose for grades 6-12. Of Mice and Men is currently used at the 9th grade level for whole-group instruction, but the committee has recommended restricting it to small groups. One parent who sits on the committee dismissed the book as “neither a quality story nor a page turner,” while another member said it should be read only in small groups “to explain away the dark part of it.” School board member Dave Eubanks, who is also a non-voting member of the review committee, added that Steinbeck’s classic has “too darn much cussing.”

In a letter sent to school board members today, NCAC pointed out that the novella paints an authentic picture of a key era in U.S. history:

One of the basic goals of the public education system is to endow students with the knowledge widely shared by other students across the country. Confronting complex and dark themes in literature is part of the educational mission of the schools. A school district puts its students at a distinct disadvantage if it fails to introduce them to the range of ideas that they will encounter in college and in life. Indeed, Criterion 1 of the Coeur d’Alene Public Schools Policy on curricular choices emphasizes the need to “represent diverse eras and aspects of our culture and other cultures.” Of Mice and Men is one of the truest representations of the hardships wrought by the Great Depression, a pivotal period in the United States.

The school board will vote on the review committee’s recommendation at its upcoming meeting on Monday, June 1. At least one board member, chairwoman Christa Hazel, has said she is not in favor of restricting the book and pointed out that the district has received no complaints about it from parents. We hope some other members will join Hazel and let sanity prevail!

Read the full letter sent to Coeur d’Alene board members below.

NCAC Letter Re of Mice and Men