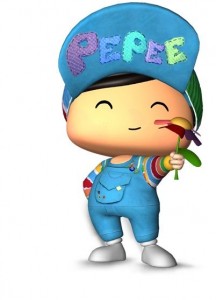 A Turkish newspaper columnist wrote last week that the state-run television broadcaster cancelled the popular children’s cartoon Pepee in 2013 because the main character proclaimed to his young audience that “theft, slander and lying are bad.” Some within then-Prime Minister (now President) Recep Tayyip Erdoğan’s government, which has recently faced numerous accusations of corruption and media intimidation, apparently took the remark as a personal attack.

Due to limited information in English, the current status of Pepee is unclear. What’s certain is that the cartoon about an energetic young boy ran from 2008-2013 on the state broadcaster TRT. After a brief hiatus, unexplained at the time, the show reappeared in 2014 on the privately-owned channel Show TV. But according to Today’s Zaman, that network was later seized by a government-owned lender and Pepee was again declared “unwanted” by authorities.

Judging by production company Düşyeri’s YouTube channel, Pepee seems to currently reside at yet another privately-owned network, Planet Çocuk. If a basic lesson in morals did indeed hit too close to home for Erdoğan’s government, perhaps the show’s enduring popularity across three networks should be taken as a positive sign for the next generation of Turkish leadership!