Comic-Con is here! We’ll be joining thousands of comics fans from around the world, and you’ll find us at booth 1918 with exclusive premiums, informative panels, and the best party at Comic-Con, all to benefit our important work defending the right to read comics!

In the 1960s and ’70s, publishers fled from spinner racks to magazine stands to escape the bounds of the Comics Code Authority. While comic books continued to labor under the stigma of low-value, juvenile speech, the larger-format magazine comics broke out, giving artists a safe haven to openly deal with adult content, provide more horror and suspense, and be frank about sexuality. Magazines like Mad, Creepy, and Eerie paved the way for a generation of titles that included Heavy Metal, Vampirella, Epic Illustrated, 1984, and Savage Sword of Conan to break new ground for a general audience and loosen the reins on some of comics’ top creators. CBLDF deputy director Alex Cox reveals the untold history of magazine comics, reviewing the impact of publications from Warren, Marvel, Heavy Metal, National Lampoon, and more!

CBLDF: Why Are Diverse Books Banned?

When the American Library Association released their latest annual list of the most challenged books, a disturbing trend was noted: Books that increased the diversity of what is available to readers were more likely to be challenged. What is it about diversity that seems to encourage censors? Join CBLDF and library and education professionals Candice Mack (President, Young Adult Library Services Association), Erwin Magbanua (Programming & Special Events Coordinator, San Diego Public Library), Carla Riemer (Librarian, Claremont Middle School, Oakland, California), Carol Tilley (Associate Professor, University of Illinois), and more for a discussion of why diverse books are challenged and how we can defend them. Moderated by CBLDF Editorial Director Betsy Gomez.

Join Jeff Smith (Bone) and Mariko Tamaki (This One Summer) for an in-depth discussion of what it’s like to be the author of a banned book. CBLDF executive director Charles Brownstein hosts this special live podcast celebrating Banned Books Week and examining the stakes of censorship for creators, librarians, and most of all, readers.

Kick-off Comic-Con with comics’ greatest creators at the Comic Book Legal Defense Fund’s Comic-Con Welcome Party, sponsored by Image Comics and comiXology, with a special gallery display from Black Phoenix Alchemy Lab! The fun starts at 8:00 p.m. on Thursday, July 24, at the Westgate Hotel, where CBLDF welcomes you to Comic-Con for a night of amazing creators, astonishing artwork, and outstanding exclusives! RSVP now: https://cbldf-sdcc2015.eventbrite.com

Meet Great Creators! Every year the greatest creators in comics drop in at the CBLDF Welcome Party. Confirmed attendees so far this year include Scott Snyder, Jock, Jeff Lemire, Kieron Gillen, Fábio Moon, Gabriel Bá, Tim Seeley, Ben Acker, Ben Blacker, Joshua Williamson, and dozens more who are expected to drop in over the course of the night!

Get the Exclusive Goods! The first 200 attendees will receive a free gift bag, with exclusive items from Image Comics, comiXology and CBLDF! RSVP now: https://cbldf-sdcc2015.eventbrite.com

Black Bar and Bleep Censor are $25 each, and the proceeds benefit the Comic Book Legal Defense Fund. BPAL will also have a selection of their catalogue scents that benefit CBLDF, including their entire Neil Gaiman line.

Get First Dibs on CBLDF Exclusives! CBLDF has been working hard to put together an exclusive assortment for Comic-Con attendees! We have an all-new tote bag featuring art by the terrific Vanesa R. Del Rey (Hit); an embroidered Comic-Con souvenir patch and new CBLDF t-shirt, both designed by Brian Wood (Starve); and the CBLDF-exclusive variant of Star Trek Green Lantern from IDW Publishing and DC Comics!

Get New Neil Gaiman Art From Neverwear! Neverwear has an ever-growing line of items based on the works of author Neil Gaiman and is an ardent supporter of CBLDF! Neverwear will support the Fund at the SDCC Welcome Party by premiering “Hope,” a new print by Chris Ridell, along with classic designs by David Mack, Jim Lee, Olivia, and Jouni Koponen. Proceeds from sales at the CBLDF Welcome Party benefit CBLDF!

Comic-Con is just around the corner, so you know what that means, right? EXCLUSIVES! CBLDF has been working hard to put together an exclusive assortment for Comic-Con attendees, and we have so many must-haves that you better walk quickly (there’s no running in the exhibit hall!) to booth 1918 when the show opens on July 8! 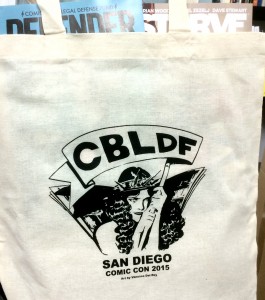 First, we have the most important of all items at a show like Comic Con, the almighty TOTE BAG. This bag features art by the terrific Vanesa R. Del Rey (Hit) and is perfect for stuffing full of comics! 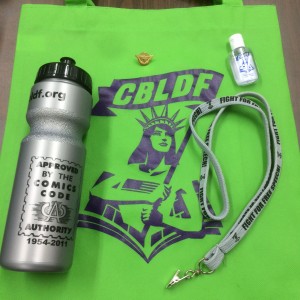 Next is something for members only (and of course, anyone can join right on the show floor at booth 1918). It’s the CBLDF CONVENTION SURVIVAL KIT. There’s the CBLDF LOGO TOTE BAG (you will absolutely need two tote bags to survive Comic-Con!), a CBLDF PIN, a LANYARD showing your support for free speech, the urgent and vital HAND SANITIZER, and of course, a WATER BOTTLE. Stay hydrated, guys. Come on. 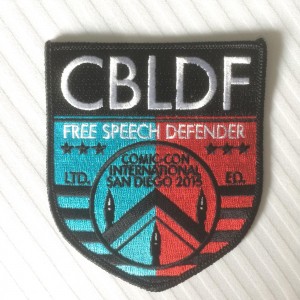 Next, we have a new item in our line-up: an EMBROIDERED COMIC-CON SOUVENIR PATCH. This one is going to be hot! Designed by writer/designer/storyteller Brian Wood (DMZ, Starve), this is being made in super limited quantities, so get to booth 1918 quick, or they will run out! This is not a drill! 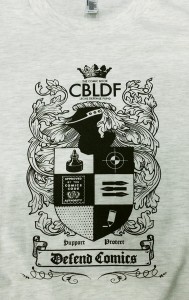 Hey, did someone say they wanted a new t-shirt? A t-shirt designed by Brian Wood, who moonlights as an awesome CBLDF fashion designer? Well, we can take care of that for you: We are premiering the NEWEST CBLDF T-SHIRT at this show! And it looks awesome, right? This design will be on a light grey shirt, Made in the USA! 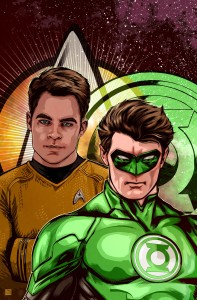 Finally, what’s Comic Con without an exclusive cover? Well this year is a big one, as two of the handsomest men in fiction collide in thhe CBLDF exclusive variant of STAR TREK GREEN LANTERN, from IDW Publishing and DC Comics! This cover is by CBLDF regular Tony Shasteen (who created this awesome t-shirt), and is EXTREMELY limited. EXTREMELY. 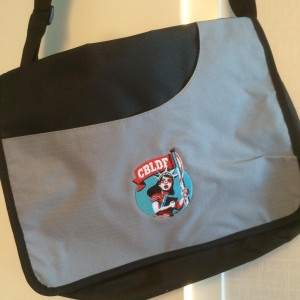 For the people who need more than a tote bag, we have made a limited number of CBLDF MESSENGER BAGS. This handy bag has a fully embroidered Lady Liberty as drawn for the 2015 Member Cards by the talented Michael Cho (Shoplifter)! The bag will be available to our members at a reduced donation.

Guys, do not delay! Get to Booth 1918 tout de suite upon entering the hallowed halls of Comic-Con. This stuff will not wait for you!

← Level Up with the Humble Gamer Comics Bundle, Presented by Dark Horse Comics and Benefiting CBLDF
Palomar Back in Rio Rancho Schools–But Restricted →