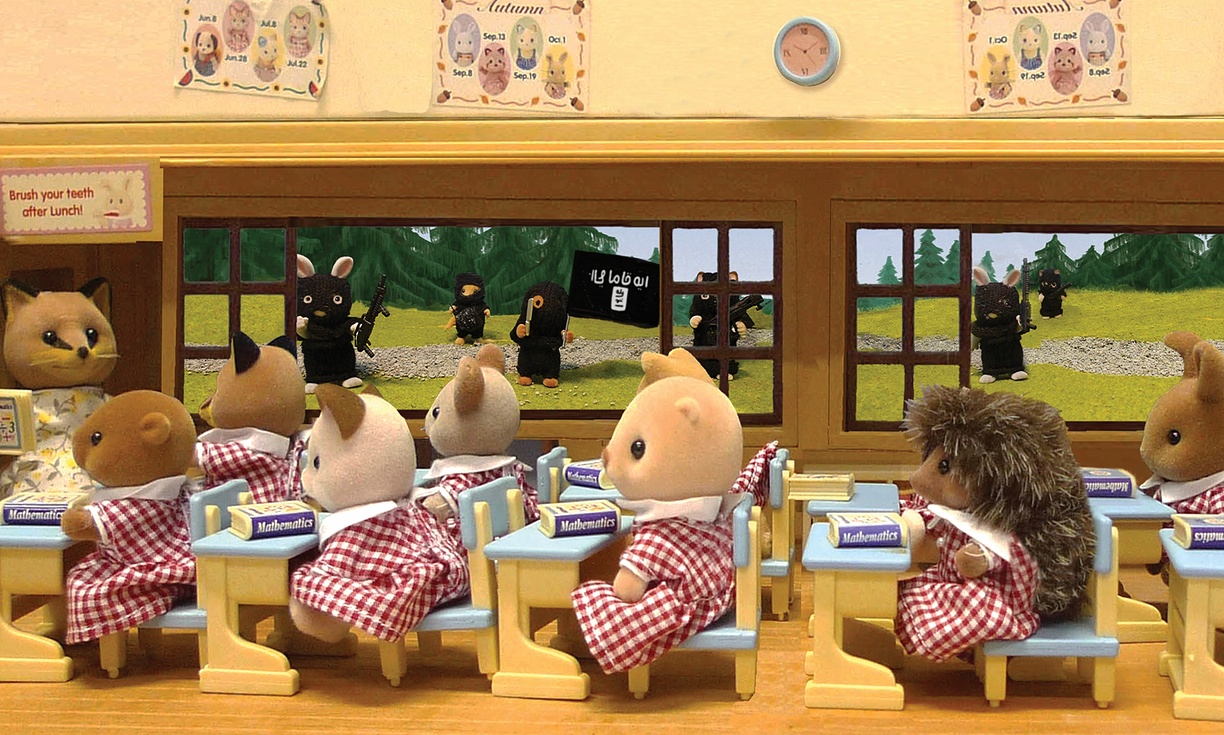 The seventh annual Passion For Freedom exhibition was hosted by the Mall Galleries, a space owned by the Federation of British Artists. Naturally the show included plenty of provocative art, and the jury even bestowed this year’s Freedom Hero Award on Charlie Hebdo. For some reason, though, police singled out Mimsy’s work and told gallery owners they would be charged nearly $55,000 for extra security if the photos were displayed. Mall Galleries, an entity separate from the organizers of Passion for Freedom, instead chose to censor the free speech exhibit.

The flocked-plastic animals in the photos come from a line of collectible toys called Sylvanian Families which originated in Japan but is well-known in the UK. Although the bucolic settings and cuddly characters are intended to heighten the contrast with the MICIS attackers, Mimsy toldThe Guardian that some of the scenes turned out to be eerily prescient:

It was creepy, because each time I imagined a scene it happened in reality. I made the beach scene before the Tunisian massacre and the schoolroom scene before Boko Haram abducted the schoolgirls in Nigeria.

The artist also reported that police judged her compositions to not be “real art.” Nevertheless, the photos had already been exhibited without any problems at the Art15 global art fair held at Olympia London in May. In a statement about the Mall Galleries’ removal of Mimsy’s photos, the organizers of Passion for Freedom pointed out the irony of this particular work being targeted:

To our shock the highlighted work was humorously mocking the despised terrorist organisation that causes suffering to many, not only in the Middle East, but also here, in Europe and the Americas.

Passion for Freedom organizers also noted that they had removed the word “uncensored” from all promotional materials for the exhibition, since it was no longer accurate. In the second half of the Guardian piece on the removal, art critic Jonathan Jones offers a review of Mimsy’s work and a warning about the consequences of suppressing speech due to fear:

Satire is not meant to be subtle. These works of art are viciously funny – and for once the joke is directed against a truly dangerous target. But is it such a dangerous target that no-one can make jokes about Islamic State any more? If an artist can’t show art on the grounds that it might provoke terror, the terrorists have plainly won….To let fear of bigots and maniacs rule our art galleries is a betrayal of the civilisation we claim to uphold.

← RETAILERS! Time to Join CBLDF or Renew Your Membership!
12 Attacks on Free Speech Around the World for Banned Books Week 2015 →